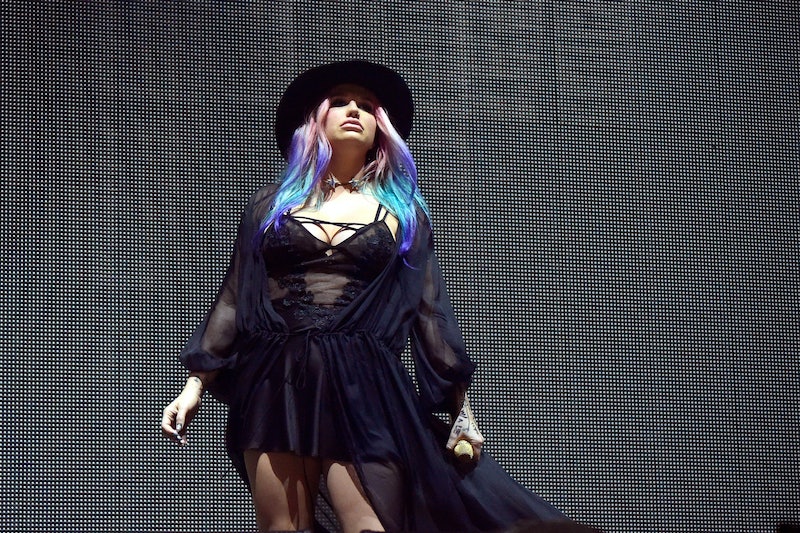 The wait is finally over. It was recently confirmed via Twitter that Zedd and Kesha are working together on her next project. Not only that, but, in his pinned tweet, which he sent out into the world on Wednesday afternoon, he confirmed Zedd and Kesha's album release date, the project title, and its amazing artwork for their joint project, True Colors. The project will be released soon on April 29, according to Zedd's tweet. And, as beautiful as all of this amazing is, I’m just relieved to hear that Kesha is finally back in the studio, working on that new album that her fans have been clamoring for.

It’s a sign that things might be on the up and up for the star, who recently attempted to get out of her contract with Sony after she alleged that her producer, Dr. Luke (real name: Lukasz Gottwald), had sexually assaulted her. Dr. Luke countersued Kesha for defamation, and denied the allegations in a tweet: “I didn’t rape Kesha and I have never had sex with her. Kesha and I were friends for many years and she was like my little sister.” After a public legal battle, New York Supreme Court Justice Shirley Kornreich upheld Kesha’s original contract with Sony, and Dr. Luke and Sony both publicly agreed to allow Kesha to record without him for future projects. However, Kesha's lawyer claimed to a BuzzFeed reporter this was an "elusive promise."

After the ruling, a number of artists and musicians reached out to Kesha both publicly and privately, inviting the artist to work with them following the court’s decision. Zedd just happened to be one of them. He tweeted after the ruling:

Thankfully, the “Tik Tok” singer took Zedd up on the offer. After posting a number of pictures of both himself and Kesha in the studio, Zedd tweeted the cover art for whatever project they’re working on together, and it looks epic:

It's not been an easy road to get here for Kesha. On April 3, Dr. Luke's lawyer released a statement to Rolling Stone , saying:

But his isn't the only word on this issue. Kesha's lawyer released a statement to Billboard in 2014 that claims that the artist is only trying to move on with her career:

This is the first sign that Kesha is finally moving on with her career, and I'm so excited for her. Thank god this project is coming out in a matter of days. I don't think I could wait any longer to hear Kesha regain her voice and find her art again.