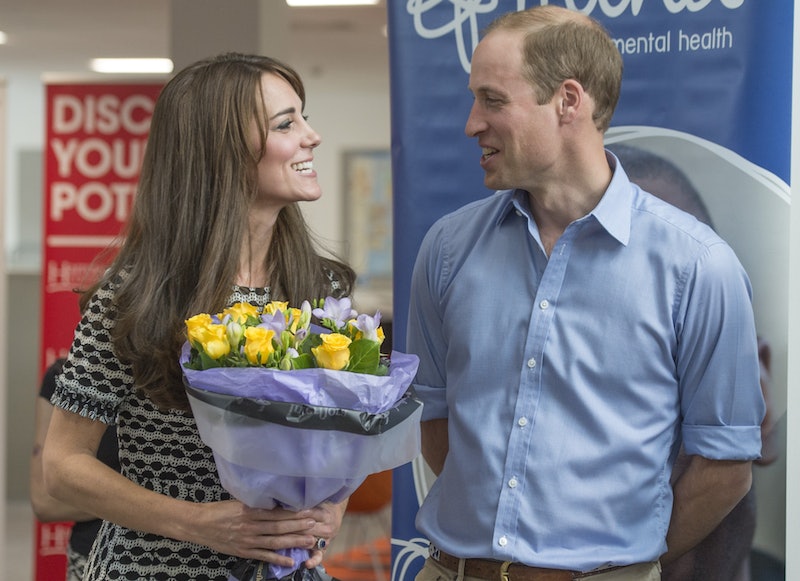 Can you believe it's been five years since Prince William and Kate Middleton walked down the aisle? There is no better way to celebrate their fifth wedding anniversary than by going back to the day William proposed to Kate. Speaking of, how did Prince William propose to Kate? As I'm sure you can imagine, the engagement was something straight out of a romantic comedy, because when aren't these two being super romantic?

Unlike the luxurious royal wedding that the entire world tuned in for, William ensured the special moment he proposed was private for both of them. So much so, that in October 2010 they secretly traveled all the way to Kenya's Lewa Wildlife Conservancy for it. Way to go, Will. According to CNN, William asked Kate to marry him in a "Rutundu cabin on the northern slopes of Mount Kenya, a secluded getaway near a sprawling animal reserve where rhinos and giraffes roam freely."

In the 2013 documentary, New Father, New Hope , William opened up about the proposal and why he chose Kenya for the location. Guess what? Not that much planning went into it. "I didn't really plan it that far in advance, like I just knew I wanted it to feel comfortable where I did it and I wanted it to mean something, other than just the act of getting engaged," he said (via Marie Claire). "She understands what it means to me being in Africa, and my love of conservation."

For those unaware, William's late mother, Princess Diana, loved Africa and traveled there often to do charity work. It's no wonder that her eldest son decided to pop the question there. It just made it all that much more special. Prior to the engagement, William carried around his mom's ring for several weeks.

"I had been carrying it around in my rucksack for three weeks before that, and I literally would not let it go," he told ITV during his and Kate's first official interview after their engagement was announced in 2010. "Wherever I went, I kept hold of it because I knew this thing, if it disappeared, I would be in a lot of trouble." Eventually, while at the cabin, he found the right moment to propose and the rest is history.

Kate definitely didn't expect to be leaving Kenya as William's fiancée. As she told ITV, "We were out there with friends and things, so I really didn't expect it at all." She added, "He's a true romantic and we had a wonderful holiday in Africa. It was very romantic and it was a very personal time for both of us."

If you're wondering whether or not he asked Kate's father for permission, he did not. "I was torn between asking Kate's dad first and then the realization that he might actually say no," he told ITV. "I thought, if I ask Kate first, then he can't really say no, so I did it that way round and managed to speak to Mike sort of soon after."

In November 2010, The Sun reported that after Kate accepted William's proposal, the two shared a "celebration bottle of bubbly" and supposedly cuddled in front of an open fire.

As for the ring, William knew it was the right choice for Kate. "Well as you may recognize now, it's my mother's engagement ring and it's very special to me, as Kate is very special to me now as well," he also revealed to ITV. "It was only right the two were put together. It was my way of making sure mother didn't miss out on today and the excitement and the fact that we're going to spend the rest of our lives together."

Did anyone else just tear up? Talk about a perfect and memorable proposal. Will, you did good.