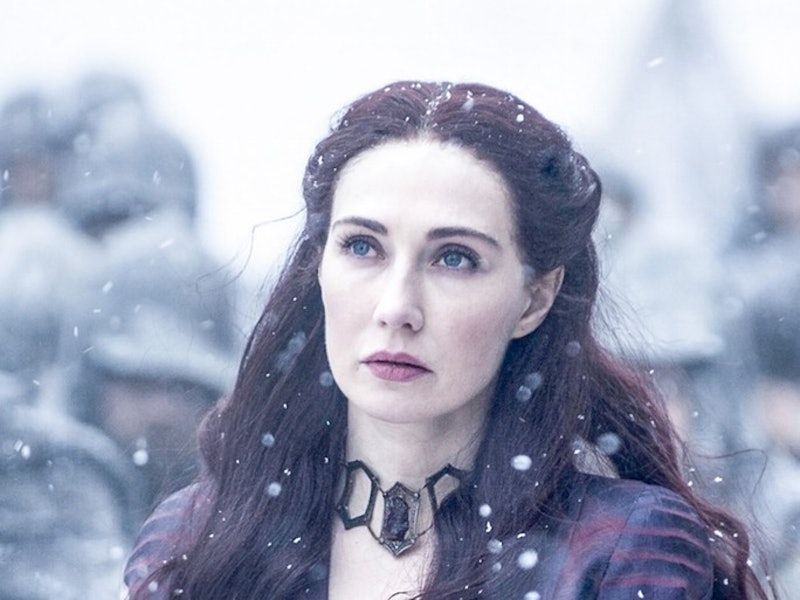 The Game of Thrones Season 6 premiere had one major OMG moment when Melisandre removed her trademark necklace to reveal her true form as an ancient and tired woman before shuffling off to bed. The scene left most fans reeling, but one Twitter user — or Daenerys herself tweeting from the Dothraki sea, as the username would suggest — pointed out Melisandre has removed her necklace before and still looked exactly the same. Could the Game of Thrones writers really have made such a massive mistake or is there a more logical reason that Melisandre's true form was not revealed?

The scene in question took place back in Season 4 between Melisandre and Selyse. In the scene, Melisandre is having a nice bath while talking Selyse into taking Shireen on their trip. Looking back, the moment is extra unsettling because now you know Melisandre is responsible for having Shireen burned at the stake. The women talk about truth, lies, and why only true believers can see past Melisandre's tricks. As Reddit user brashendeavors points out, Selyse is noticeably uncomfortable in the scene, but calm. The user posits that Selyse knew about Melisandre's true form right from the start because of her devoutness, and it makes sense.

However, if Selyse sees Melisandre as the crone, then why doesn't the audience? There are several explanations and only one of them involves the Game of Thrones writers making a pretty sizable continuity error.

It's A Matter Of Perspective

The scene in Season 4 is seen from Selyse's perspective. If Selyse is seeing Melisandre as the crone that does not necessarily mean the audience would. Lots of television series like to play with perspective, and it is a smart way to hold off on the big reveal. Seeing Melisandre's true form casually revealed while she was taking a bath would have been jarring. Allowing the audience to see Melisandre as usual while dropping hints that there is more to her than meets the eye is a more clever move.

The Magic Is Not Tied To The Necklace

Yes, the scene in "The Red Woman" makes a big deal about Melisandre removing her necklace, but that does not necessarily mean the necklace contains the magic that conceals her identity. In fact, if the only thing keeping the world from seeing Melisandre as she truly appears is the ruby around her neck, then that is a pretty big risk. If someone ripped it off, she would be exposed and Melisandre is way too smart for that.

Only Melisandre Can See Her True Form

Think about how often Melisandre talks about reflections and the visions she sees in the flames. There is an inherently visual nature to her powers. This is quite possibly the only scene where the audience has witnessed Melisandre on her own in a vulnerable position. As far as the audience knows, Melisandre always sees herself as she is — ancient — while the rest of the world sees the magic unless Melisandre chooses to reveal herself.

The Magic Involves The Potions

Just as prominent as her necklace in the scene, are Melisandre's bottles of potions. These are the same bottles present in the Season 4 scene. Given her gift for witchcraft, Melisandre could be relying on a much more practical potion to conceal her form instead of the less reliable jewelry method.

She Has Simply Been Wearing Her Mask This Whole Time

The people of Asshai, where Melisandre is from, are famous for wearing masks. The only other character on the show from Asshai is Quaithe of the Shadow (the woman in the red mask who spoke with Dany in Season 2), and she wore a literal mask, but given that Asshai is a place of magic, the wearing of a mask could be figurative. Melisandre seemed so defeated in the scene where she reveals herself, maybe this is the first time she has removed her "mask" in many, many years.

The Writers Thought It Would Be A Cool Twist

While I tend to think the Game of Thrones writers have been setting up the Melisandre reveal for a long time (it could even be secret intel from George R. R. Martin), there is always the chance they thought it would make a good twist. As much as it is nice to believe the showrunners have everything plotted out seasons in advance, sometimes inspiration strikes for any good writer and they go with it, and worry about the consequences later.

Whether the Melisandre reveal has been in the works for multiple seasons or it just came to the writers while they were working on Season 6, it is an amazing twist that adds a whole new layer to the Red Woman.