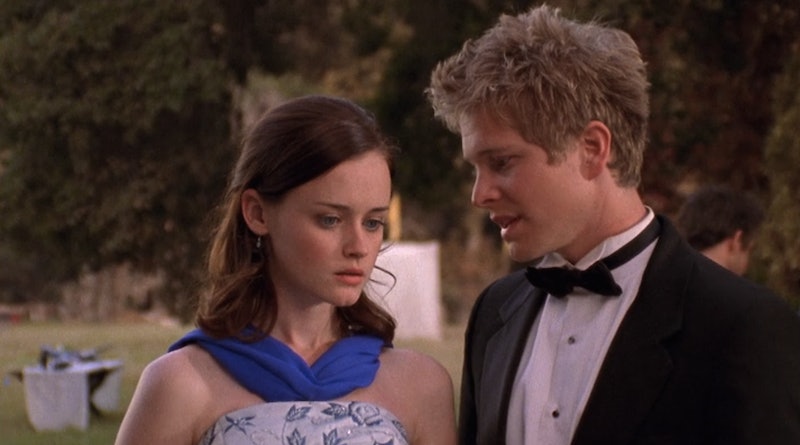 If you thought the days of deciphering cryptic messages from attractive men were far behind you, think again. Because the men from the Life and Death Brigade — you know, the secret society that Rory covered for the Yale Daily News on Gilmore Girls — are tweeting all about the Gilmore Girls revival, and trying to make sense of the details they’re spilling is about as difficult as making sense of boys in high school. But I appreciate that they’re trying! Especially when their tweets reveal just enough information to get me all kinds of excited for the revival. Like a message that Robert Grimaldi actor Nick Holmes tweeted on Tuesday that described the Gilmore Girls revival star spending the day filming in a "hot room" with his fellow LDB-ers and a bunch of “beautiful creatures.” I have a lot of ideas about what this tweet could mean, but what I’m really wondering is if it tells us something big about the Gilmore Girls revival wedding.

So let’s break this down, shall we? Because I think this tweet could mean big things in store for these mischievous guys. The tweet that Holmes sent had a rather cryptic message. It reads: “Spent all day in a hot room with @TancSade and a group of the most beautiful creatures you’ve ever seen; all in service of the LDB. #Gilmore.”

Um, a couple things. First of all, my mind went wild when I saw this tweet, because OMG what does it mean? As someone who is a pro at close reading, I think there is a lot happening between the lines of this tweet. For instance the “hot room” could mean temperature, but it could also mean attractive. And then there are the “beautiful creatures.” That could mean other Gilmore cast members, or it could even mean creatures in the literal sense.

So here’s what I’m thinking the tweet means: I think this “day” that they spent in a “hot room” with “beautiful creatures” could very well be Logan’s bachelor party. Think about it: There’s a wedding likely happening, people. Add a rumored wedding together with a tweet about a hot room and beautiful creatures, and I am totally thinking this could mean a bachelor party was filmed.

Because if it is Logan getting married in the Gilmore Girls revival, you know these guys would throw him one hell of a stag party. It's a possibility, at least!