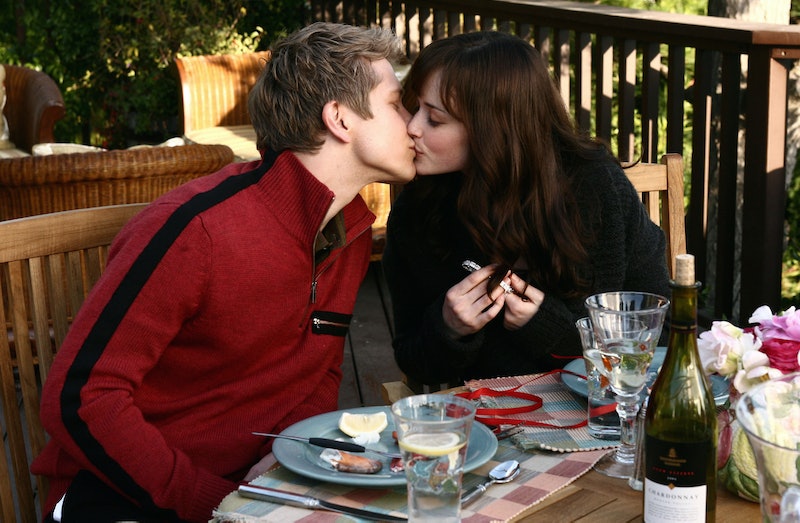 Since the Gilmore Girls revival on Netflix finally got confirmed, Internet speculation has been rife about what has happened to Lorelai, Rory, and the rest of the gang since the show ended in 2007. Actual details about the plots of the four new Gilmore Girls episodes are scarce, but inside info has started to trickle out of the secretive set. News that all three of Rory's important boyfriends — Logan, Jess, and Dean — are to return to the show has only fuelled conspiracy theories. While it's been revealed that Rory is single in the Gilmore Girls revival, here's an interesting theory for you. Did Rory marry Logan, following his proposal in Season 7? Rory might be single now, but who says it's simply because she doesn't have a boyfriend. Could she and Logan have separated and are getting divorced? Certainly makes you think, right?

Milo Ventimiglia, who plays brooding boyfriend Jess, confirmed that his character appears in three out of the four new Gilmore Girls episodes, leading fans to believe that he plays a pivotal role in Rory's life. Dean will only return for one episode, but Logan could be in as many as all four episodes according to Gilmore News. So what role will Logan play in the Gilmore Girls revival? It's unlikely that we'll get any legit answers about Logan's marital status until the revival episodes air, but it certainly seems possible that he might have married Rory in the interim years since the show's original run ended.

Rory famously turned down Logan's marriage proposal in Season 7, choosing instead to be single and focus on her career. But this may not have been the last time that Logan proposed to Rory, and she could've just as easily changed her mind about marrying him too. If Logan and Rory did get married, then, all these years later, it might be the case that the couple are getting a divorce. I have nothing to base this on aside from the fact that having all three of Rory's past boyfriends in the Gilmore Girls revival makes it look as though each has an important role to play, and Logan's role is perhaps the most mysterious of all considering the note that he and Rory left things on. Not to mention the fact that he was the last boy we know of who held her heart.

For now, we can purely speculate on what might have happened to all our beloved characters in the years since we last saw them. Basically, we should just be super grateful that we get to reunite with Lauren Graham and Alexis Bledel in new Gilmore Girls episodes. Whoever Rory is with, or ends up with, we're just lucky to be a part of it.