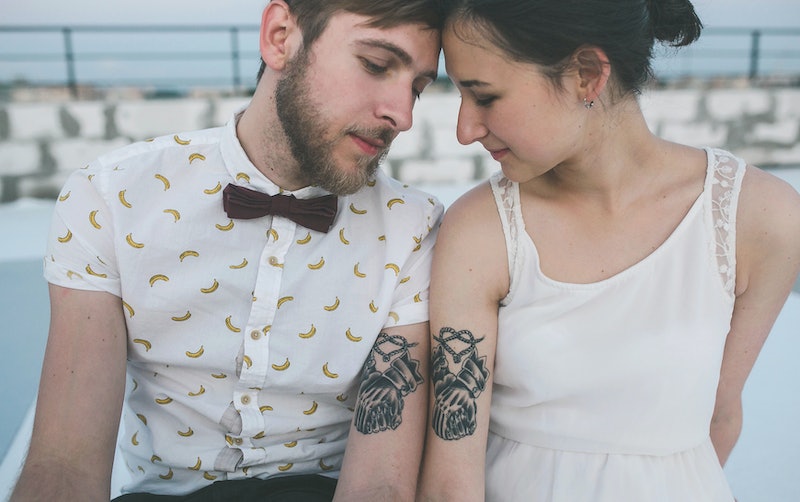 Maybe all is going well with someone — you're dating, you're hanging out, you're having a fine time — but there's a nagging feeling in the back of your mind. What are the under-the-radar signs you're incompatible? If you find yourself late-night Googling something along those lines, here's a hint: You might, in fact, be incompatible. When you know, you know; when you're not sure, you know, too, but it's harder to admit, because the thing you know in that case is that it's wrong. And that makes everyone sad.

It's true that chemistry is a weird thing, fickle and reckless in some, curvaceous and never-ending in others, and nary a reason for it, other than the fact that pheromones are real, and often most of what draws us to each other is not a naked-eye kind of thing. So, then, compatibility — and its ugly stepsister, incompatibility — is not always something you can put your finger on, point to and say, "There it is. Right there." If you're having trouble figuring out if you're compatible with someone, chances are that you're not. Here are nine weird ways to tell you're incompatible, according to experts.

1. You Forgot About Plans Later

"This is so normal, it weirdly slips under the radar: You’re not looking forward to seeing them," New York–based relationship expert and author April Masini tells Bustle. At the extreme of this, you might even forget that you have plans with your boo later, which is the definition of being nonplussed about a rendezvous later. "When you’re feeling the love, you want to connect — whether it’s in person, electronically or by sending and receiving a love letter in the mail," Masini says. Sidenote: If you're sending and receiving snail mail love letters, guess what? You're compatible!

"If you’re not looking forward to seeing them, or even dreading it — and you find yourself procrastinating instead of getting ready to meet — chances are this isn’t a match, and the two of you aren’t romantically compatible," Masini says. That's totally OK. Just own it and don't drag things out.

2. You Think They're Hot, But You're Not Attracted To Them

When you find someone hot, but there's just no chemistry between the two of you, you're incompatible, relationship coach and psychic medium Cindi Sansone-Braff, author of Why Good People Can't Leave Bad Relationships, tells Bustle. Picture this, she says: "Everyone around you thinks that you've totally lost it, because this really hot guy or girl really wants you, but you're just not feeling it." Not a good sign. "Their touch, which you hoped would leave you feeling all hot and bothered, leaves you feeling cold and distant," she says. This might be something that happens off the bat, or, sadly, it can also happen later on in a relationship.

Generally, you can tell right away whether you're attracted to someone on that level. "Chemistry is one of those crazy things that's defies definition, but it's just there from the get-go, and two people either have it or they don't," Sansone-Braff says. "When there's chemistry between a couple, everything about the two of them turns each other on — a look, a caress, a touch, a glimpse of exposed flesh can blast their conjoined libidos into the stratosphere; but fabulous looks alone don't always make for spontaneous combustion. Electrifying chemistry between a couple is ignited via a true heart, soul, mind, body connection, and it isn't based on what someone else or even what everyone else in the universe might think is hot — it's based on what your body registers as thermonuclear," she says. Go with your gut.

3. You Have Different Life Views

If one of you feels completely jaded, and the other has found inner peace, you're not going to get very far, BetterHelp telehealth counselor and psychologist Nikki Martinez tells Bustle. It's true: A sarcastic, sardonic grumbler won't do well with a super blissed-out yogini. "These two things are night and day, odd that they would fit together for a fling, much less a long and significant relationship." If you're trying to hold it down with someone who is a negative Nancy, while you're a total Pollyanna — or vice versa — things will likely crumble before long. "If these are regular views you each hold, and a way of life that you are wanting to continue to live by, you are likely not going to find yourself romantically compatible," Martinez says. Let it go.

"The biggest sign of romantic incompatibility is if you and the person you’re seeing have different expectations from the relationship," Salama Marine, psychologist and online dating expert for dating website EliteSingles, tells Bustle. "This often means you have differing expectations from life, and are in different places." Maybe you see yourself living in Montana on a ranch, and they would rather live in a bustling city like London. Not a good match.

"It is therefore important to establish this at the beginning of the relationship," Marine says. "Ask yourself whether you’re looking for something serious or casual. If you begin to develop feelings for someone and you discover they only want something casual, you can end up getting hurt," she adds. "It will benefit you to have this conversation early on." Be as honest and upfront as you possibly can.

5. You Embarrass Each Other

You can tell that you're not in tune if your partner is embarrassed by your romantic gestures, Rob Alex, who created Sexy Challenges and Mission Date Night with his wife, tells Bustle. "If they are embarrassed once or twice, OK." But if every time you send them a bunch of heart emojis or leave them a little love note, they tell you how stupid they think it is, not good.

"If they feel your romantic actions are childish or over the top, then romantically you two are not going to hit it off," he says. "In return, that is also the case if you find that you are embarrassed, or just feeling your partner's romantic intentions are stupid," he adds. Sure, we can all feel a little goofy around our mates sometimes, and they're not always going to do exactly the gesture we want. But if you or your partner feel embarrassed or ashamed of each other? "It might be hard for the two of you to come together and find a happy medium place in the area of romance," Alex says. I'll say!

When you're near your partner, if you never feel butterflies, you may not be well matched. "[When] you don't feel a rush being near them," you're probably not that into it, zen psychotherapist and neuromarketing strategist Michele Paiva tells Bustle. If there's no sense of excitement being next to them, how can you be terribly compatible? "If your oxytocin isn't going up, ditch the idea, and don't force it," she says. Smart.

7. You Can't Imagine Making Out

This one only applies to someone with whom you haven't been intimate before. "If you can't imagine kissing someone, or tried and it wasn't your thing, chances are it's a no," life coach Kali Rogers tells Bustle. And if that's the case, move on. "No need to force romantic chemistry, and a kiss is the easiest way to predict it," she says. A little imagination goes a long way here.

8. You Can't Eat Together

Do you hate the way your partner eats? If the way they chew gets on your nerves, you might have a problem, Stefanie Safran, Chicago's "Introductionista" and founder of Stef and the City, tells Bustle. Of course, if you are misophonic, this is a totally different story.

9. You Are Yawning All The Time

When you are bored with what they're saying, Tina B. Tessina, aka Dr. Romance, psychotherapist and author of Love Styles: How to Celebrate Your Differences, tells Bustle, you aren't compatible. It may be a strange sign — might not be the first thing you'd think of — but it is real, and if it's happening, pay attention.