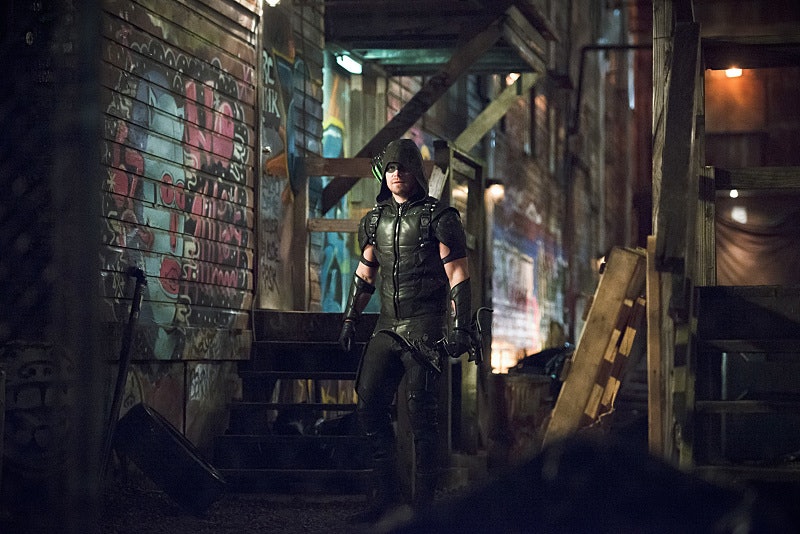 How many times have we heard Oliver say the words "You have failed this city?" I've never personally counted, but we can assume the number is pretty high up there. And yet, those very words were directed right back at him during Wednesday night's episode "Canary Cry," when a new Black Canary imposter was introduced on Arrow . Now, I know what you're thinking — how dare the show try and replace Laurel so soon after her death. But fear not because I highly doubt this character, whose name is Evelyn Sharp, will become a regular member of the team. She's just using Laurel's sonic device in order to seek justice on those who have wronged her — one of which includes the Green Arrow himself.

After Oliver finally managed to track this Canary 2.0 down, she reprimanded him for failing this city and for leaving them all to die at Reddington. It turns out that she was referring to Reddington Industries, which is where Damien Darhk held all of his H.I.V.E. prisoners. The Arrow failed to save her parents and now she's out to make him and everyone else she thinks was involved in ruining her family pay for what they've done. Before all of this, was a teenage girl at the top of her class, so this is just another prime example of another innocent life Darhk has ruined. (Seriously, can someone just take this guy out already?)

So don't worry about being expected to fall in love with a new Canary just yet. This is just an angry young girl who wants vengeance and is using Laurel's ensemble to do it. It is curious, though, as to how she was able to use the sonic device in the first place, considering that Cisco had keyed the object to Laurel's vocal chords specifically. It shouldn't have been able to work for anyone else but her. Are we to assume that this academic kid figured out how to tweak the settings or is there something else at play here? Only time will tell, but one thing's for sure — Laurel can't, not now and not ever, be easily replaced.