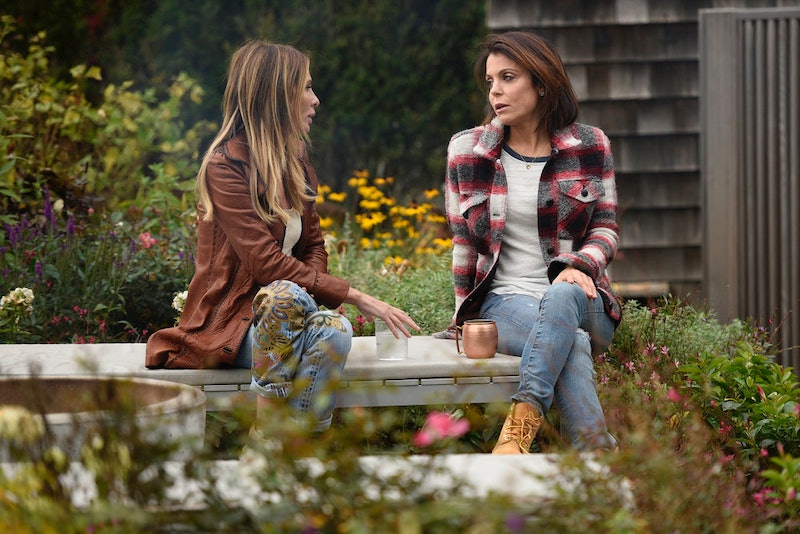 Before I start in on this truly stupid fight that Bethenny Frankel and John Mahdessian are having on Real Housewives Of New York, I want you all to remember that we’re like, three episodes into the season. Three episodes and the fighting is this bad already! I think this season of Real Housewives Of New York has the potential to be as good as Season 3, aka the season of “Scary Island.” Anyway, in episode 2, a very drunk John Mahdessian, the boyfriend of Dorinda Medley, got into a fight with Bethenny Frankel. Just when you thought it was squashed… Bethenny had a birthday party and it all got much, much worse.

Bethenny’s birthdays are never great — someone always cries or fights or screams. This one was no exception, though at least there were Moscow mules and barbecue. John accompanied Dorinda to Bethenny’s Hamptons house for her party. Personally, I wouldn’t go to a party for someone who I screamed at 18 hours earlier, but that’s me. Bethenny did as Bethenny sometimes does, literally ignoring the fact that John was there and basically acting like a mean girl to Dorinda. Luckily, after many awkward moments, Bethenny realized how upset this whole dust-up was making Dorinda and she and John signed the Great Bridgehampton Peace Agreement of 2015. Will it stick? That’s to be determined, but we’ll see what happens.

I’m usually Team Bethenny when it comes to Real Housewives, but in this instance, neither party is particularly honorable. I can’t side with John, because he barges into places he’s not invited and insults hard-earned businesses, but I can’t side with Bethenny because sometimes (even at your own birthday party) you have to be cordial to people you hate. That’s a life lesson. They seemed to have buried the hatchet for now, but if I know Real Housewives Of New York, there will be blood.