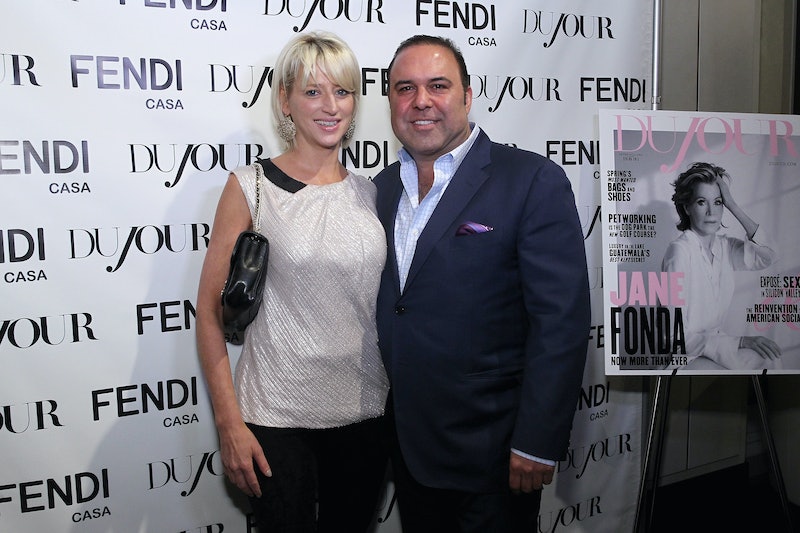 Reality TV doesn't have the best track record when it comes to romance, and that is especially the case with the cast of the Real Housewives of New York City . Current Housewives Bethenny Frankel, Ramona Singer, and Luann de Lesseps have all unfortunately parted ways with their husbands after their RHONY journeys began. It's too early to tell if new Real Housewives of New York star Dorinda Medley and her current boyfriend will suffer the same fate, but finding out who Dorinda's boyfriend John Mahdessian is may provide some clues.

John was first introduced to us during the Season 7 premiere of RHONY when Dorinda whipped out a photo of her and her boyfriend to show her 21-year-old daughter Hannah Lynch, who promptly responded with a look of disgust. If you couldn't tell, she's not much of a fan of John, but when you're neither her biological father nor her beloved late stepfather, it's a tough act to follow.

During the premiere, we also got to see Dorinda visit John in his natural habitat, Madame Paulette, the couture dry cleaning and restoration business he owns. Dorinda used the words "machismo," "mafia," and "the Man" to describe John, so you know he's going to be involved in some memorable moments on RHONY this season. This scene of Dorinda dropping some F-bombs on John during dinner in this Season 7 preview definitely confirms that.

So we know what John does for a living and that he's quite the entertaining guy, but there's so much more to the newest RHONY main squeeze than has made it onto the show so far. Here are seven essential facts about John that any self-respecting RHONY fan should know about.

A 2009 Observer profile dubbed John "the Sultan of Stains" for his ownership of dry cleaner to the stars Madame Paulette. The nickname has stuck ever since then, at least in the media. Madame Paulette was started by John's father in 1959, and he took over the family business in 1987. Through the years, Madame Paulette has served such clients as legendary fashion houses like Chanel, museums like MoMA, and major projects like cleaning 80 gowns that belonged to the late Princess Diana before they were auctioned off for charity.

However, John didn't just earn the moniker "the Sultan of Stains" for owning Madame Paulette. He truly is something of a miracle worker when it comes to making clothes look as good as new. With Madame Paulette's secret formulas, he has saved a banquette with red wine spilled all over it by Norma Kamali and 90 seemingly unsavalgeable garments that a socialite wanted to donate to a museum, just to name a couple of fashion emergencies that were no match for John.

2. He Has Something In Common With The Kardashians

Just like Kim, Khloe, and Kourtney, John's ancestors also come from Armenia. John's grandfather escaped the Armenian genocide and emigrated to the United States, where he worked from the age of 10 on and was so poor, he had to wear newspapers around his worn-out shoes instead of buying a new pair. “Those are the things that I remember, so for me to work 12-15 hours a day, 6 to 7 days a week, is nothing compared to what he had to go through,” John told The Armenian Weekly in 2009.

3. He Has Always Been An Overachiever

John is super successful now, and that's probably because he's always been driven to be the best. He left Boy Scout camp early one summer because he won all of the awards, was elected class president in high school, and got a plaque on the wall of the Newsday offices at the age of 17 for selling an impressive amount of subscriptions during the summer he worked there, according to the Observer. But we all know you haven't made it until you've appeared on RHONY.

4. He Wanted To Be A Wolf Of Wall Street

This may surprise you, but John didn't grow up wanting to clean rich people's underwear. Shortly after John graduated from Villanova with a degree in engineering, he was off to work in investment banking at Merrill Lynch, according to the Observer. However, the long days and high stress of running the Madame Paulette empire became too much for John's father Noubar, and he suffered a nervous breakdown. John decided that it was in the best interest of his father's health if he took over the business, and within six months, his father was able to retire, according to the Armenian Weekly. In many of the interviews John has done with the press, he seems pretty jazzed about running Madame Paulette, so I'd say he made the right decision.

As I previously mentioned, Madame Paulette has quite the impressive client list, and John wants you to know that. A 1999 New York Times article described John as "a spirited name-dropper," and if you read any interview with him, you will see that's definitely the case. In that New York Times piece alone, John name checks Anna Wintour, Steven Spielberg, and Michael Jackson. But then again, if you were trusted with the fine garments of high-profile individuals like these, you'd probably brag about it too.

6. He Once Got Into Trouble For Helping Diddy

Sometimes, John has taken customer service a little too far, like in 2011 when he came under fire for organizing an NYPD police escort for Diddy to travel from the venue of his concert in New York to a New Jersey club. The move was subsequently slammed by then-Mayor Michael Bloomberg. It turned out that Diddy only had the NYPD police escort for a block, but it just goes to show you that if you want something done, you should give John a call.

7. His Views On Love Are A Bit Worrisome

Though we really haven't seen enough of Dorinda and John together on RHONY yet to know anything about their relationship, a couple of tidbits that have been in the press in the past make me a little skeptical about the couple's future. John's father told the Observer, “He thinks girls are like shirts: You have to change them every two weeks" in 2009. John also told the Armenian Weekly in 2009 that he hoped to marry an Armenian woman, but he doesn't have enough time to devote to dating anyone.

Well, those interviews did take place a long time ago, so maybe John has turned over a new leaf since then. Clearly, he thinks Dorinda is worth his time now. Here's hoping these two don't suffer the same fate as Dorinda's RHONY castmates.