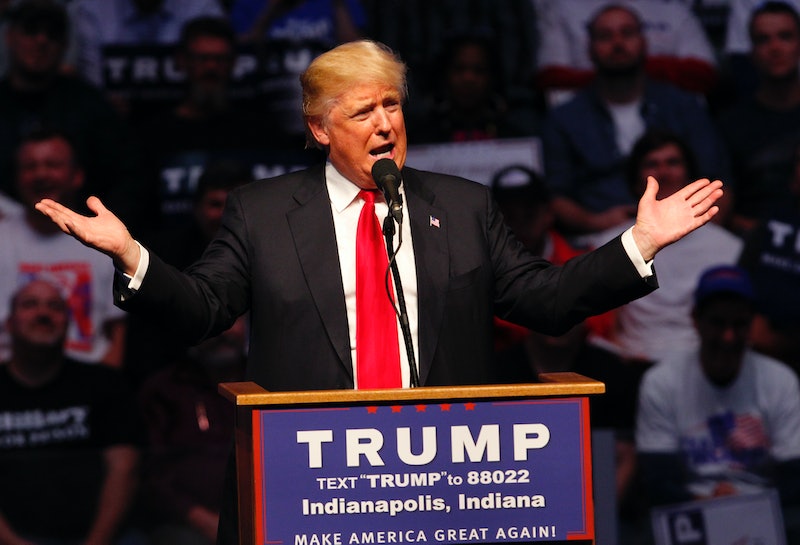 The attendees at the April 30 White House Correspondents' Dinner will include a diverse array of politicians, entertainers, and media pundits. In short, it sounds like exactly the type of event Donald Trump would attend — after all, he even went to the TIME 100 Gala on the evening of the April 26 primary. (Bernie Sanders, Hillary Clinton, and Ted Cruz were also included on the outlet's most influential people list, but they all skipped the festivities.) So, why isn't Trump going to The White House Correspondents' Dinner?

Well, for starters, he wants the public to know that his absence is certainly not because he wasn't invited. "I was asked by every single group of media available to mankind [to attend this year]. But I've decided not to go," Trump told The Hill earlier this month. He went on to state that he believes the press would falsely report that he didn't have a good time: "The press is dishonest. If the press would be honest, I'd go because I'd have a good time. ... But no matter how good a time I had, the press would say, 'Donald Trump was miserable.' What would I need that for?"

As you may recall, Trump attended the dinner in 2011 and was famously skewered by President Obama. In case you need a refresher, here's what Obama had to say about everything from his birth certificate controversy to Celebrity Apprentice:

Although his facial expressions in the video footage tell a slightly different story, Trump told The Hill that he had a great time in 2011 and he thought President Obama's jokes were entertaining:

I was very honored by all of the attention. The president told joke after joke and it was good. They were all very nice and delivered nicely and I had a great time and told the press. For four years, I've read what a miserable time I had.

Of course, Trump's absence definitely doesn't mean that host Larry Wilmore has forgotten about him. In fact, Deadline reported that the Nightly Show host has promised plenty of jokes will be made at Trump's expense on Saturday evening. Wilmore added that the business mogul's candidacy "is great for comedians. The whole Trump fiasco writes itself. He's so funny and unusual it's almost impossible to write jokes funnier than the real thing."

Although Trump hasn't specifically stated where he'll be instead, he's not the only presidential candidate who's skipping the event. The Hill reported that Bernie Sanders will attend as a guest of CBS News, but he's the only candidate whose attendance is confirmed — so it looks like Clinton, Cruz, and Kasich may sit the event out this year as well.

And though Trump won't be at the White House Correspondents' Dinner in person, it's safe to assume his name will be invoked more than once.