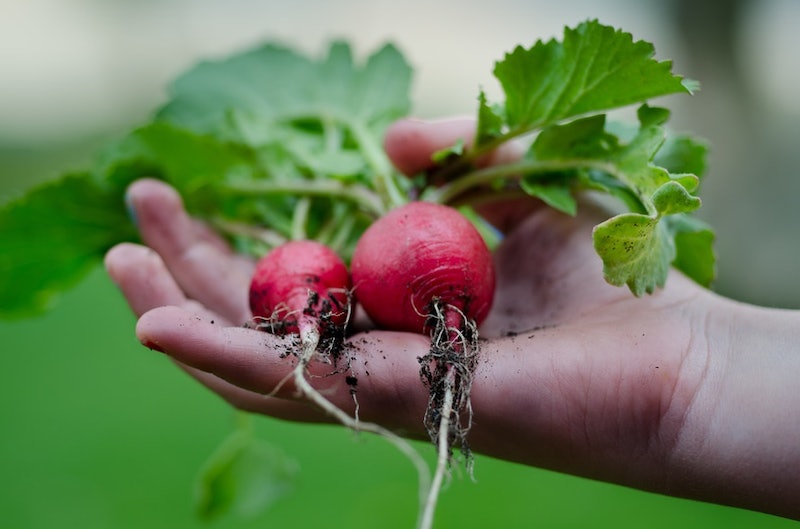 There's a new shift upon us: The "ugly produce" movement. You know what I'm talking about: Fruits and veggies with flaws — scabs, bruises, blemishes — and produce that is totally misshapen. Although such imperfect items often get tossed aside purely because they lack asthetically pleasing features, markets, farmers, and consumers are starting to catch on to all the reasons that ugly produce is actually beautiful. In reality, ugly produce has plenty to offer both producers and consumers; in fact, it might even be better for us than conventionally attractive fruits and vegetables.

When it comes down to it, so-called "ugly" produce is simply a result of soil conditions, temperature, genetic variation, and improper pollination. It is perfectly safe to eat, not to mention the fact that nature generally does not creature perfect produce all on its own. That's why it's "nature" — it's, you know, natural, not shaped by some other power (like humans). Sadly, though, we have become so conditioned to produce being flawless and all looking the same that when we see an apple with a weird bump or a potato that's not perfectly symmetrical, we believe there's something wrong with it — even when it's perfectly fine otherwise.

Most recently, NPR has presented further reasoning that ugly produce is beautiful. One study explored the nutritional value of ugly produce and found ways that it's actually better for us than the perfect produce you see in the average grocery store.

It can be hard to change our ways. We're just so used to walking into the produce section and seeing colorful, shiny, uniform apples, and cantaloupes that are all beautifully spherical; but read on to better understand why ugly produce is the best choice.

1. Ugly Fruit Is More Nutritious For You

The study presented by NPR found that scabs on an apple help deliver more antioxidant compounds called phenylpropanoids, compared to a scab-free apple. Another study found that scabby apples have 10 to 20 more phenolic compounds. I know "scabby apples" don't sound appealing, but try to stick with it.

Furthermore, research has found higher levels of resveratrol in grape leaves that had fungi. Resveratrol helps fight the fungi and has been found to aid heart health and arteries, suppress cancer, protect muscles, and support mental function. (FYI, people take supplements for resveratrol.)

Grocery stores feel sorry for the ugly produce (kidding), so they sell it at a discounted price. Last week, I got a bag of six delicious, firm red apples for less than a dollar. Seriously, people, there was nothing wrong with them. They looked great, smelled great, and were crunchy, juicy, and packed with flavor. A whole bag of apples for less than a buck!

The discounts will vary, and the produce available depends on whatever ugly foods the store has received. But my first stop at the grocery is always the few shelves on the end of the last produce aisle, to see what kind of presents they have waiting for me.

Food waste is a monumental problem in our country. Huge. It can't be stressed enough. In America, we waste about 40 percent of our food; and yet, millions of Americans go hungry on a daily basis. Why? For produce alone, estimates fall around 26 percent — 26 percent of produced is tossed away before even hitting the shelves of the grocery stores. (Some reports say it's over 50 percent!) According to the USDA, the food wasted in 2010 alone was worth over $16 billion. Let that one sink in.

It doesn't start or end here, though.

The discarding of ugly produce isn't merely about this food going to waste. It's also about the water and other resources used to produce it — to produce perfectly acceptable food that is being thrown out even for the slightest imperfection. What's more, produce that's dumped into landfills decomposes and produces methane gas, which has 21 times the global warming potential of carbon dioxide.

Don't let all that be for nothing. Support ugly produce. It just wants to be loved.

4. You Can Help Support Local Farmers

Take a look at a company called Imperfect Produce in California. They deliver ugly produce to homes and businesses. They work with local farms, taking the rejected produce from them and bringing it directly to you. This is how they are able to cut back on costs, and you're also showing your support for local farms at the same time.

If you're not in California, that's A-OK. You can always hit up your local farmers markets — the mothership of ugly produce.

5. Some Ugly Produce Might Be Exposed To Fewer Pesticides

Fruit being ugly doesn't necessarily mean that it's organic; even if it's misshapen, it still could have come from a producer that utilizes pesticides. But if you can get your hands on organic ugly produce, it goes without saying that its organic nature provides a host of benefits. Because this produce can't rely on pesticides, it can end up with 20 to 40 percent more antioxidants, since the produce was left to fend for itself and fight off pests on its own.

So go on. Give ugly produce a chance. There's no reason not to, right?