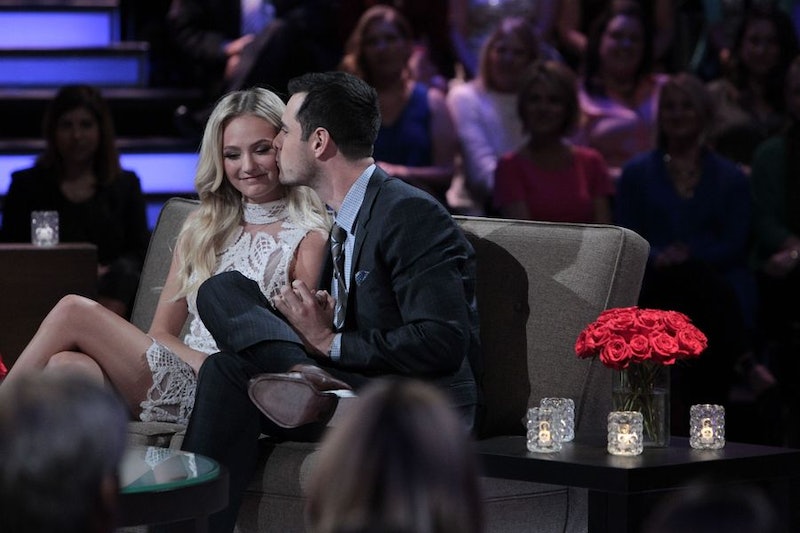 There are very few success stories to come out of The Bachelor , but Sean and Catherine Lowe are one of them. The pair met during Season 17 in 2013, married in 2014, and now are expecting a baby together. But, as the lone Bachelor couple to make it down the aisle, do they think Ben Higgins and Lauren Bushnell's relationship is for real? In a word: "Yes," Catherine tells Bustle at her Dreft baby shower in New York City. "Ben and Lauren are great," she says. Sean elaborates, saying that he thinks Ben isn't the kind of guy who would have proposed if he didn't feel like it was right. "I haven’t met Lauren but just knowing Ben and knowing he’s a really good guy with a good head on his shoulders, yeah I feel like it's for real," Sean says.

As of April 28, Ben and Lauren have made it six weeks since the finale aired, which may not seem like a lot, but it is in comparison to most Bachelor Nation pairs. The Season 20 duo has already surpassed the relationship lengths of five other Bachelor couples. Of course, it is still early. Sean admits that even though Ben is a "good guy" that doesn't guarantee success for the newly engaged pair. "Of course a good guy could realize, 'Oh I made a pretty rash decision on a TV show,'" Sean says. But, ultimately, he's "sure it will work out."

Of course, it wouldn't make Ben a bad guy if he and Lauren didn’t make things work in the end, but it’s reassuring that they have Sean and Catherine’s stamp of approval. That’s the best thing a new Bachelor couple could ask for.