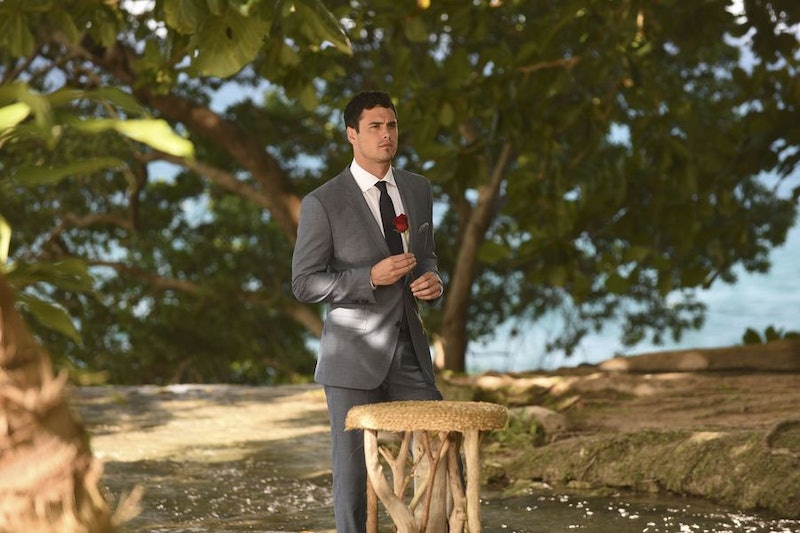 From what Bachelor Nation has witnessed thus far this season, Bachelor Ben Higgins has a blatant disregard for the unspoken "rules." Essentially, Ben has upgraded from bland, but hot, country boy to a truly revolutionary Bachelor. (Revolutionary in a good way? That remains to be seen.) The most recent in Ben's outright disdain for the preordained edicts: His pre-finale announcement that he is, in fact, engaged. Though Ben considers this season of The Bachelor to be a success, he's not alone. How many Bachelors are still with their winners?

Over the 20 seasons of The Bachelor, only Sean Lowe is still married to the woman to whom he bestowed that sacred of all floral entities, the Final Rose. Technically, Jason Mesnick is also still with one of the women from his final two — although not the one he initially picked (sorry, Melissa). So, with those odds, forgive me for having a shade of skepticism about Ben's optimistic claims.

However, I am a converted Benliever. I am of the conviction that this Ben follows through on whatever it is he puts his mind to, whether it be winning the hearts of ladies on The Bachelor, selling mad software in Denver, or finding the tightest possible shorts to wear on national television. Here's why I think Ben will remained married to his beloved (whoever she is).

He Said It Himself

You have it right here, folks. The season "worked," which means it accomplished the goal of bringing a wife to poor, "unlovable" Ben Higgins. We have seen from the beginning how trigger happy he was about the idea of matrimony, so if he's considering this a win, then so shall I.

His Options Are Both Amazing

Whether he chooses JoJo or Lauren, Ben cannot go wrong. Both of these women are the total package, and Ben's admission of loving both of them illuminates the fact that he would be happy to be married to either of them.

His Heart Is In The Right Place

As the saying goes, Ben is here for the right reasons. Throughout the season, he has proven to be extremely upstanding (as much as you can be on a reality show about picking your future spouse from a pool of prescreened applicants), caring, and compassionate. He truly wants to find a woman to spend the rest of his life with, and if he feels as though this is the best way to do so, then I wish him and his fiancée the best of luck.

He Wants To Emulate His Role Models

Ben often cites his parents' marriage as an example that he wants to live up to. The fact that, according to Parade magazine, Ben's parents have been married for over 30 years really dictates Ben's example of a successful, long-term relationship.

So, whoever he chooses, here's hoping that he can find the happiness he has been chasing via this journey on The Bachelor.