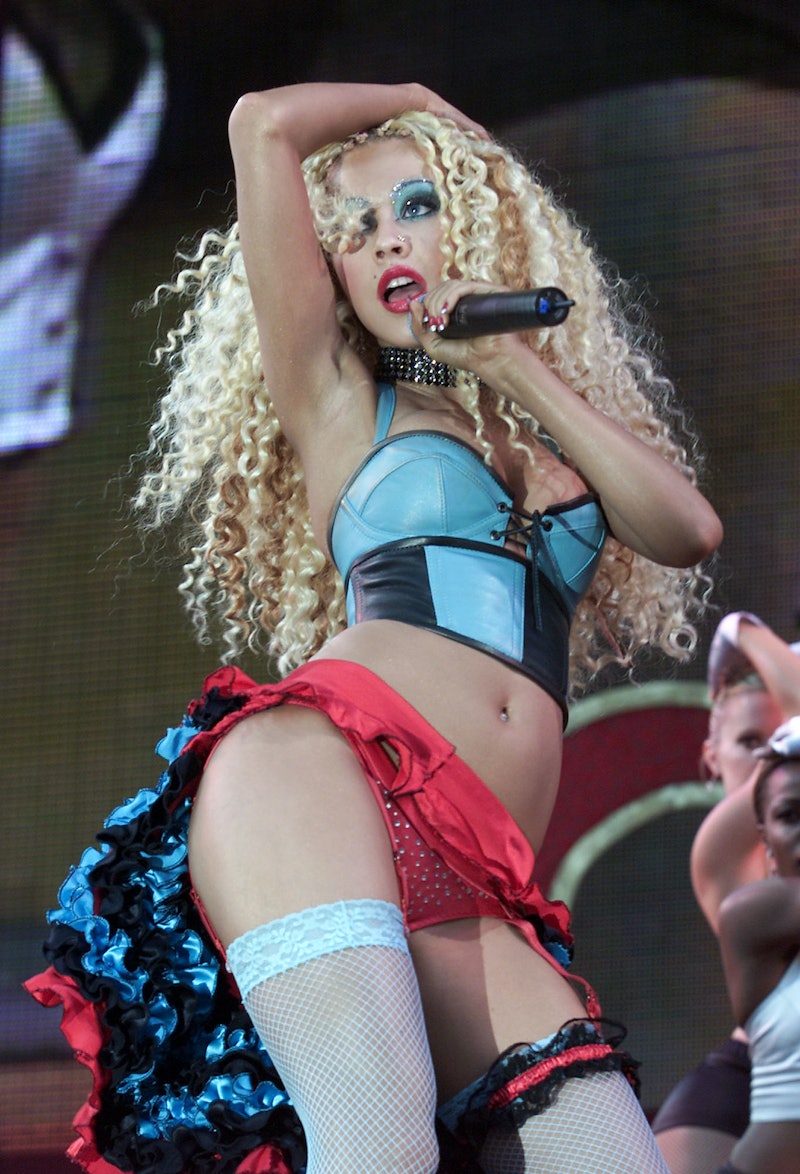 When we were younger, there were a lot of interesting trends floating around. Jeans were so low we could barely sit, asymmetry was a look that was coveted, and everyone was 99 percent something. But the weirdest thing, in my opinion, was the underwear trends of the 2000s. It was like we started wearing our knickers as outerwear and decided that a flash of a bra or the peek of a thong were all sorts of chic.

To be fair, not everyone was walking around with their G-strings poking out from underneath their pants. But we dabbled in other ways. Slip dresses — previously reserved to hide panty lines underneath other frocks — now became mainstream and as chic as any other formalwear. Lace-edged camis that looked like nighties were just the ticket to pair underneath blazers, while corsets were just as acceptable to sport with jeans as a normal cotton tank top.

Everything was silk, lace, and satin, and we probably looked like we barely had enough time to put on all of our clothes before leaving rumpled beds behind. I guess it was kind of hot but — looking back — also kind of tragic. Below are 11 underwear trends of the early 2000s we thought were oh-so-cool.

It seemed like everywhere we turned in the early 2000s, there was a corset for sale. Whether we paired ours with an asymmetrical jersey skirt or went belly-button-baring with super low-rise jeans, we looked totes in vogue.

If you had a sheer shirt, you didn't have to worry about strategically hiding your bra. Instead, the point was to embrace the lacy-ness and let it shine through. It felt very Madonna-esque and chic.

Usually worn underneath blazers or paired with tiered mini skirts, these silk camis were a fancy step up from our ribbed cotton tanks.

If we didn't want to show off our bra straps, we'd often swap out the cloth straps with the clear kind. Which didn't really make any sense because people could very obviously still see them. Did no one think of the strapless bra back then?

All you had to do was get your thong strings up over by your hip bones and let them peek out from your super low-rise jeans. It felt a little naughty but, more importantly, it was incredibly uncomfortable. We were already subscribers of the "suffer for fashion" motto.

The original slip dress was that silky thing your mom or grandma would wear underneath a dress to hide panty lines and to keep the frock from riding up. We repurposed it to just be its own dress, period.

To make daywear seem more boudoir-appropriate, adding a lace trim on any neckline seemed to be a go-to. Whether spaghetti strap dresses or V-neck tops, almost everything got the lace treatment in the early 2000s.

This was the corset trend spun out. Now we could up the sexiness ante in our formalwear by having our tops mimic ribbed nighties. It was all elegance and heat, and I remember just about every girl buying a dress like this for our early high school dances.

Not even belts escaped the underwear trend.

If all else failed, we could have taken one of those thin, chain-link belts and layered it on top of the waist of our jeans, so it mimicked a thong peaking out.

We were a clever bunch, and we were determined to make the "underwear as outerwear" thing work.