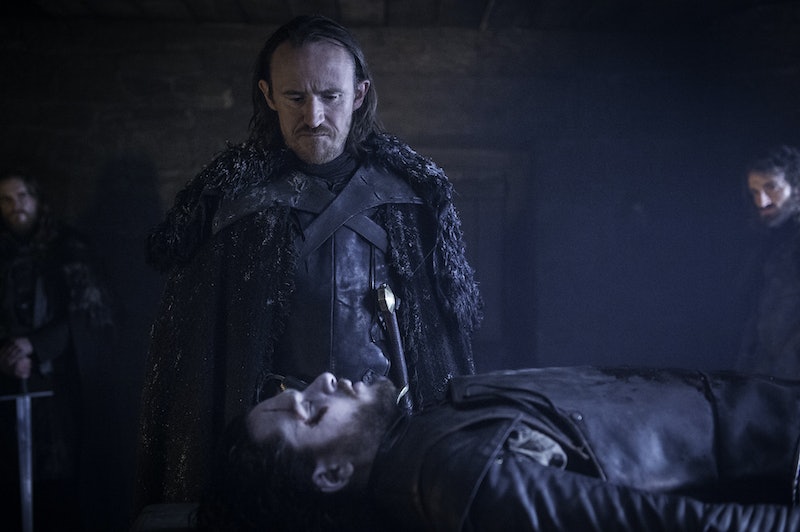 Well, the first episode of Season 6 of Game Of Thrones has come and gone without the glorious resurrection of Jon Snow. As we speak, he is still lying very dead in a locked room at Castle Black and Olly is still roaming around with blood flowing through his veins. It doesn't seem fair, does it? During Sunday's premiere, I am sure that most fans were pleading with the old gods and the new that we would see an end to the looming questions regarding Jon Snow's fate. Unfortunately we didn't get our answer, or maybe he really is just dead and we're all refusing to accept it. Either way, now the question remains, will Jon Snow be resurrected in Season 6 of Game Of Thrones ?

Multiple shreds of evidence make me think that he will be back (in some form) this season. I am firmly on Team Jon-Isn't-Gone-For-Good ( yeah, it's a long name but we will work on that later). If the fans who believe he is coming back are correct, I think it will have to happen relatively soon. "Soon" in Game Of Thrones time is definitely a loose term but I am convinced that the resurrection event of our Lord Commander will take place at least before Season 7.

This is easily one of the most compelling and likely theories out there. The theory itself isn't exactly time sensitive, so it doesn't point to his resurrection happening right away, but some of the trailers for Season 6 point to it being confirmed or debunked sooner rather than later, which means that Jon's fate will likely be revealed with it. A huge storyline from the books that readers have been waited to see in the show will be happening according to previews for this season. Trailers show The Tower of Joy, which is where Ned's sister, Lyanna Stark (who was betrothed to Robert Baratheon) was kept under watch of the King's Guard after she was supposedly kidnapped by Rhaegar Targaryen.

A nearly year long battle was fought that eventually led to the Baratheons' hold on the Iron Throne. During a raid of the tower led by Ned (also teased in the previews), Lyanna died. Ned made an unknown deathbed promise to his sister and later returned from battle with an infant son named, Jon. The R + L = J theory says that Jon's parents are actually Rhaegar Targaryen and Lyanna Stark and Ned claimed him as his own to save him, since all Targaryens were being slaughtered. That's right, Jon might be a Targaryen. Whether Jon's body is burned by the Night's Watch or burned for the Lord of Light by Melisandre, Jon should be reborn in flames if the theory holds.

As we saw in the premiere, Ser Davos and his men have Jon's body locked in a room with them at Castle Black, while they figure out what to do with it. Alliser Thorne has agreed to let Davos ride South (with some mutton!) but only if he agrees to surrender by nightfall. If he doesn't agree, then they will storm the room where Jon's body lies and that probably won't bode well for a happy ending. When will nightfall occur? Well, I'm fairly certain that we wouldn't be crazy to assume it will happen before next season.

This theory wasn't as likely to me in the beginning, but, after the premiere, I am starting to believe that it may hold some serious weight. The very first scene of last week's episode showed us Jon's clearly dead body. That was kind of expected, but something was a little odd about what we heard. Ghost could be heard howling, scratching, and yelping from his quarters next to Jon. This could just be due to the fact that he may be mourning the violent loss of his master, but the problem is that Ghost never makes noise. It is very emphasized in the books that Ghost is relatively mute. Could this be a sign that Jon may have Warged into his dire wolf before his death and is now trying to communicate? It would certainly give a reason for Ghost to be acting so out of character and making so much noise. If this is the case, then Melisandre (possibly wearing her necklace) may be able to bring Jon back to his original form.

The Show Would Alienate Fans

This is my own personal feeling. If the show makes fans wait until next season to resolve the Jon Snow situation, they may lose some viewership. I don't think you can feasibly drag a plot like this one out for that long before people start getting frustrated.

Hopefully, one of these theories holds true and we see Jon Snow up and running within the next few episodes. Maybe we will even get to see him kill Olly. Fingers crossed!