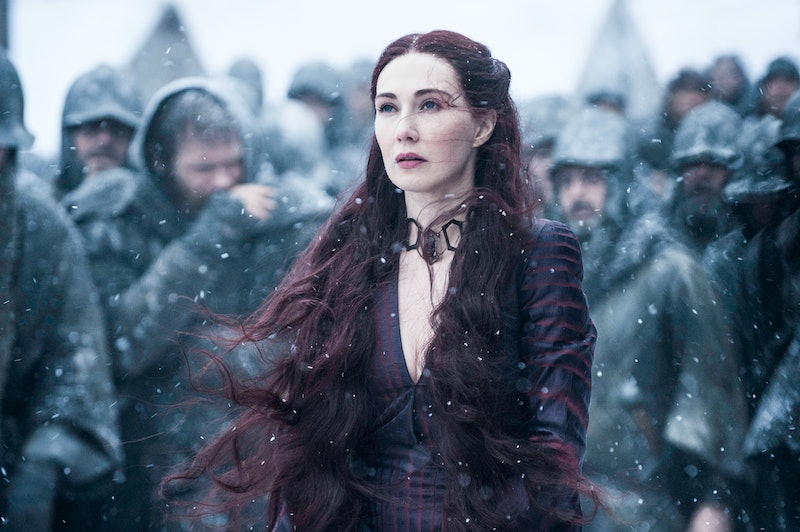 Those of you who were hoping that Melisandre would resurrect Jon Snow on Game of Thrones may have found yourselves slightly disappointed about the Red Woman's reaction upon reuniting with the Lord Commander of the Night's Watch. After being led into the room where his body was being kept, she looked him over, touched his cheek, and that was it. Yes, you heard me correctly. That is all that happened. She didn't even deny it when Davos said that he was gone. So does this mean that Melisandre won't resurrect Jon Snow after all? I suppose anything is possible still, but for now, things aren't looking all that hopeful. Well, at least that was the case until the last few minutes of Sunday night's episode.

In a twist that I don't think even the most powerful Seer could see coming, Melisandre revealed herself to be an old woman, whose magically enchanted necklace has been hiding her true elderly appearance. If your jaw didn't drop to the floor when that reflection of hers transformed then you might want to check your vitals because that was some crazy sh*t right there. I mean, wow!

So what does this have to do with Jon Snow eventually coming back? Well, if the Red Woman is powerful enough to mask her appearance in such a major way, then clearly she's a lot more powerful than any of us ever realized. Given how long that she's clearly been around, I wouldn't be surprised if she knew of a way to bring Jon Snow back to life. Perhaps she's just biding her time for now or maybe it can only be done on the night of a full moon?

Either way, the point is that she clearly has some impressive magical tricks up her sleeve, which means our boy Jon still has a fighting chance. And for right now, that's good enough for me.