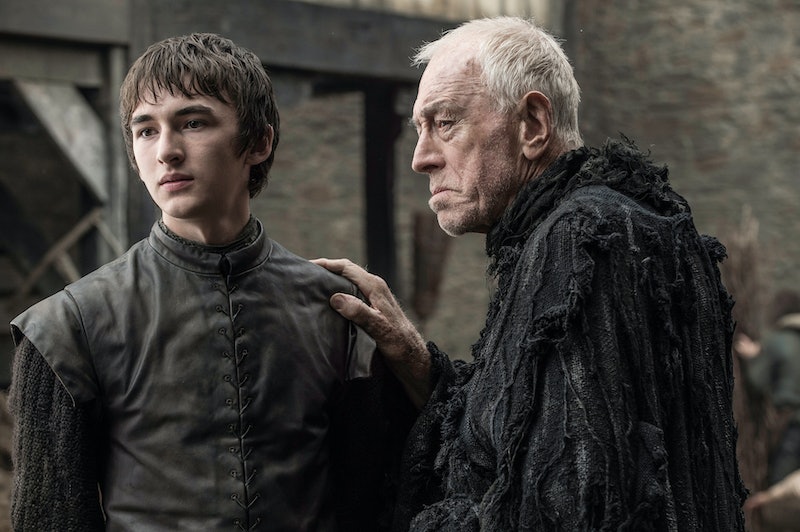 On this Sunday's episode, "Home," Bran Stark returns to Game Of Thrones after 11 episodes missing in action — and he won't be alone. Although the young Stark was offscreen for the entirety of Season 5, he wasn't just taking a leisurely nap: he was taking lessons in magic from a mysterious entity known as the Three-Eyed Raven. Despite the fact that Bran has been having dreams about crows with three eyes ever since he was pushed from the tower by Jaime Lannister, and despite the fact that he spent an entire season journeying from Winterfell to beyond the Wall to find the magical mentor, we still don't really know much about him. So who is the Three-Eyed Raven, exactly?

Brynden always had a distinctive appearance, even pre-tree; he lost an eye during a battle and refused to wear an eyepatch, and he was born with a red birthmark on his face roughly in the shape of a bird, earning him the nickname "Bloodraven." His father's last act at king was one that would throw the Seven Kingdoms into chaos: he legitimized all of his bastards, including Brynden and his half-brother, Daemon Waters — aka Daemon Blackfyre. This would lead to years and years of wars of succession, referred to as the Blackfyre Rebellions, throughout which Brynden would remain a staunch Targaryen loyalist, fighting against his half-brother.

Throughout this time, Brynden served as Hand for two kings, first for his nephew Aerys I and then for Aerys' brother Maekar I. When King Maekar died, the issue of inheritance was murky, so a Great Council was convened to decide who would sit the Iron Throne after him. Brynden invited Daemon's son Aenys Blackfyre to attend the Council, but when the claimant arrived in King's Landing, the Hand had him seized and beheaded. As punishment, the new king Aegon V forced Brynden to take the black and live out the rest of his days at Castle Black.

Brynden did well for himself as a member of the Night's Watch; shortly after King Aegon V's brother Aemon arrived at the Wall to serve as maester, Brynden was elected Lord Commander. However, his reign would not be a long one; he disappeared while ranging north of the Wall only 13 years later… and no one ever heard from Bloodraven again. Until now.

It's a mystery what happened to Brynden between when he went missing and when Bran first encounters him — but somehow he became proficient in both skinchanging (warging into animals) and greenseeing (observing the past, present, and future through the eyes of weirwood trees). Whatever he's been doing, he has apparently been waiting for Bran's arrival for a long time, as he tells the Stark boy in A Dance With Dragons:

I have watched you for a long time, watched you with a thousand eyes and one. I saw your birth, and that of your lord father before you. I saw your first step, heard your first word, was part of your first dream. I was watching when you fell. And now you are come to me at least, Brandon Stark, though the hour is late.

It's natural to assume that Bloodraven is a good guy, since he's helping one of the Starks; but since we know so little about him, we also know very little about his true motives. One other character in the books has encountered Bloodraven — and it was far more chilling:

A face took shape within the hearth. Stannis? [Melisandre] thought, for just a moment … but now, these were not his features. A wooden face, corpse white. Was this the enemy? A thousand red eyes floated in the rising flames. He sees me. Beside him, a boy with a wolf's face threw back his head and howled. The red priestess shuddered. Blood trickled down her theigh, black and smoking.

To Bran, the Three-Eyed Raven is a savior; to Melisandre, he's the enemy. Which will he turn out to be when all is said and done? Does he want to help Westeros? …Or destroy it? Only R'hllor knows.

More like this
Emilia Clarke Shares More Details About The New 'Game Of Thrones' Series
By Maxine Harrison
Twitter’s Reaction To HBO’s ‘Game Of Thrones’ Jon Snow Spinoff Idea Is Chaotic
By Stephanie Topacio Long
Did *That* Character Really Die In The 'Stranger Things' Season 4 Finale?
By Grace Wehniainen
Here's Where Your Favorite Characters Stand After The 'Stranger Things' 4 Finale
By Grace Wehniainen
Get Even More From Bustle — Sign Up For The Newsletter