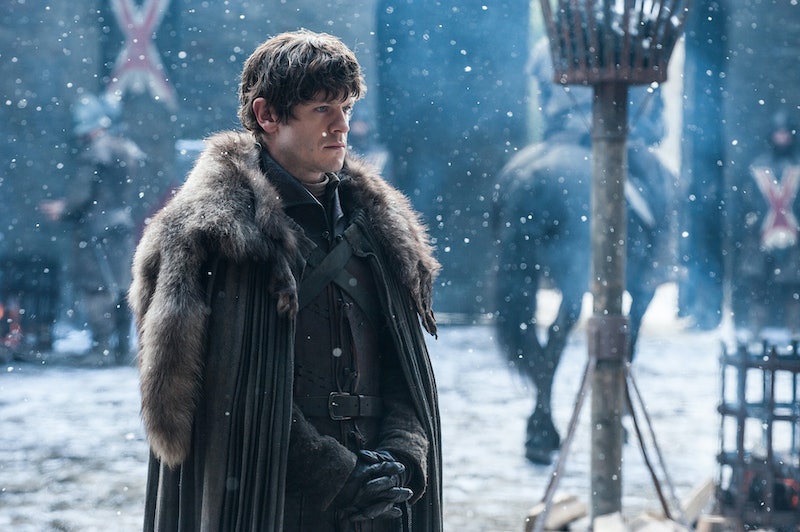 If you were trying to summarize this past Sunday's Game Of Thrones Season 6 premiere for a friend, you might describe Sansa's and Theon's thrilling escape from Winterfell; or the shocking coup in Dorne; or the shoulda-seen-it-coming revelation of Melisandre's true form. In any case, you would probably use a lot of words and a lot of exclamation points. Well, HBO wouldn't:

That is the terse and infuriatingly vague description the network used to promote the first episode of their new season, "The Red Woman." Now HBO has released the official descriptions of Season 6's next two episodes, and if they're at least a bit more verbose, they're still every bit as vague.

Bran trains with the Three-Eyed Raven. In King’s Landing, Jaime advises Tommen. Tyrion demands good news, but has to make his own. At Castle Black, the Night’s Watch stands behind Thorne. Ramsay Bolton proposes a plan, and Balon Greyjoy entertains other proposals.

And for Episode 3, titled "Oathbreaker":

Daenerys meets her future. Bran meets the past. Tommen confronts the High Sparrow. Arya trains to be No One. Varys finds an answer. Ramsay gets a gift.

Let's break these 12 little nuggets of information down and see what details we might be able to parse from their vagueness, like Melisandre attempting to divine the future in her flames. (And hopefully we have better luck than the Red Woman.)

1. "Bran trains with the Three-Eyed Raven."

A father figure advising Tommen over the body of a dead sibling? This scene is already reminiscent of the time Tywin took Tommen under his wing while Joffrey laid in state. What words of wisdom will Uncle Jaime have for the king? Perhaps the news that he's not actually his uncle? Will he be able to tell his only remaining child the same truth he told Myrcella shortly before she succumbed to Ellaria's poison?

3. "Tyrion demands good news, but has to make his own."

What good news is Tyrion demanding? That Daenerys has returned? That Meereen is at peace? And who is he demanding it from? With Jorah and Daario gone, his only advisors are Varys, Missandei, and Grey Worm. And what good news does he "make"? Maybe this is referencing the scene from the trailer where Tyrion instructs his cohorts about the ways of dragons.

4. "At Castle Black, the Night's Watch stands behind Thorne."

Uh-oh. Davos should have just let Ghost take out Ser Alliser before the traitor was able to consolidate his hold on the Night's Watch; now Jon's murderer has the full might of the brotherhood behind him. How many crows will Davos have to kill in order to ensure the sanctity of Jon's corpse? (You know, so he can be brought back to life in the next episode or two.)

Of course he does. I hope Ramsay's plan involves falling into a sarlacc pit. All joking aside, this tidbit is fairly intriguing. Who is he proposing his plan to? His father? Or is he proposing a plan to someone else in alliance against his father, afraid that Walda's pregnancy undermines his status as Roose's heir? Whatever it is, I'm sure this "plan" bodes ill for anyone in Ramsay's general vicinity.

6. "…and Balon Greyjoy entertains other proposals."

Curious. Out of all the nuggets of info, why are Ramsay and Balon the only ones mentioned in the same sentence? Does this mean that Balon is actually the person Ramsay was making the aforementioned plan with? If so, what would a hypothetical alliance between the Boltons and the Greyjoys achieve? Hopefully the "other proposals" Balon will be entertaining will come from his brother, Euron Greyjoy, a character book readers have waited impatiently to be introduced on the show. (For the record, Balon has been offscreen even longer than Bran; he was last seen in the Season 3 finale, an absence of 21 episodes.)

On to "Oathkeeper"… Khal Moro told Dany exactly what her future entails in the Season 6 premiere: living out the rest of her life in Vaes Dothrak among the dosh khaleen, the other widows of fallen khals who serve as spiritual leaders for the Dothraki. If Dany is meeting her future, that must mean that she'll arrive in the Dothraki capital in Episode 3 and be inducted into the dosh khaleen.

OK so this one's pretty exciting. For a show so rooted in events that happened in the past, Game Of Thrones has been notoriously stingy with actual flashbacks, the only one so far being the young Cersei scene that opened Season 5. But Bran's training with the Three-Eyed Raven clearly means we'll start seeing more of Westerosi history — including, perhaps, an eye-opening look at what happened at the Tower of Joy all those many years ago? (Coinciding this revelation with Jon Snow's resurrection in the same episode would be a master stroke.)

Tommen is easily the nicest Lannister, but nice doesn't really get you anywhere in Westeros, does it? The boy king was unable to stop his beloved queen from being arrested by the Faith Militant last season, so it'll be intriguing to see if little Tommen has grown up at all this year. But with both of his siblings dead, the clock is ticking for Tommen thanks to Maggy's prophecy, so hopefully this confrontation doesn't get too heated.

AKA she continues to do exactly what she's been doing since the start of Season 5. Very helpful. Hopefully she gets at least one good whack in while sparring with the Waif this time.

An answer to what, exactly? Presumably he's still looking for a way to keep Meereen from erupting into chaos in Dany's absence. What form would an answer to that query take? Dany had to get engaged to a Meereenese citizen in order to be accepted by her subjects; will he find a similar match for Tyrion? Will he make an alliance with one of the Great Houses? Will we ever find out who the leader of the Sons of the Harpy is?

It's interesting to note that the only people mentioned in both brief descriptions are Bran (understandable since he's been gone for so long), Tommen (understandable since he's the king) and… Ramsay? The bastard of Bolton is looking more and more important, even after Sansa has escaped his clutches. I'm sure many viewers are hoping his "gift" will be a bomb, but perhaps it has to do with his missing bride's whereabouts?

Conspicuous by their absence in either episode description: Davos and Melisandre, Ellaria and the Sand Snakes, Sansa and Brienne, Cersei and Margaery, Sam and Gilly… and Littlefinger. What is Petyr Baelish up to these days? Nothing good, I'm sure.

Maybe we'll find out next Sunday in Season 6 Episode 2, "Home."