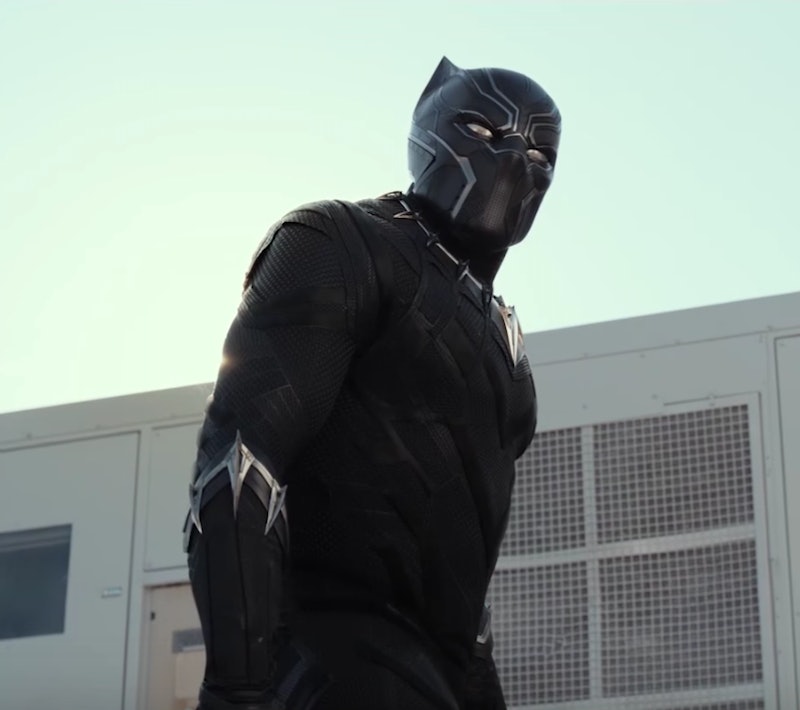 There are many different ways to become a superhero. Tony Stark became Iron Man because of his intellect and desire to survive after being nearly killed. Captain America, on the other hand, was the result of a government experiment — or, as Tony Stark put it in Avengers, "Everything special about [Cap] came out of a bottle." Those are all the origin stories already explored in the Marvel Cinematic Universe (MCU), but now with the arrival of Black Panther in Captain America: Civil War , fans are getting an entire new kind of origin story...sort of. When T'Challa arrives on the scene in Civil War, he isn't Black Panther yet, but when he takes on the role, his suit fits like a glove, he knows his strength and he knows how to fight, no training montage needed. He also has the Black Panther ring — although what it does, exactly, is left a total mystery.

Although Black Panther's origin story is hinted at, mostly through a connection to his father, who (small spoiler!) dies early on in Civil War, what Black Panther ring does isn't really explained, other than that it has to do, somehow, with how his powers work. Really, the jewelry is shown as significant only in that it was given to the hero by his father. As fans of Black Panther might already know, T'Challa inherits the mantle of Black Panther from his dad, and in Wakanda, the royal family is, essentially, made up of Black Panthers. Each king is trained to be a warrior, and the best warrior in Wakanda becomes Black Panther.

So, why is Black Panther fighting against Cap? The answer, while thus far only hinted at in interviews and promotional materials, is allegedly because Black Panther blames the Winter Soldier for the death of his father, T'Chaka. Boseman seemed to confirm this idea in an interview with Entertainment Weekly while reflecting on the motives of his character for being Team Cap or Team Iron Man. "I think there's perhaps a bit of a maverick there, and then there's also a need to live up to traditions and his father's legacy," he said.

If that truly is the reason Black Panther is after the Winter Soldier in Civil War, then the ring could be crucial to T'Challa's identity as a leader and fighter simply because of the fact that it belonged to his father, who was the Black Panther before him. Whatever the significance of Black Panther's ring, I think it's safe to say that all will be explained in the Black Panther movie, set for release in 2018.