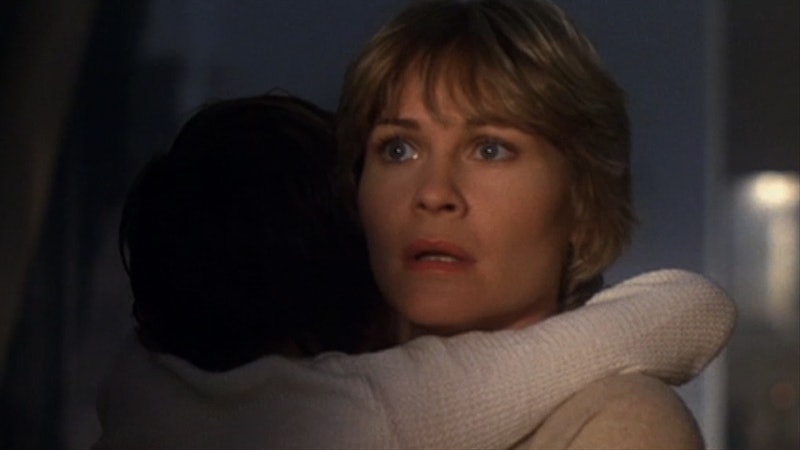 Despite fairy tale films' tendency to feature motherless heroines, there were plenty of great cinematic moms in movies from my childhood. There was the mama long neck from The Land Before Time who fights a Tyrannosaurus Rex to save Littlefoot. There was the mom from Dumbo, who gets locked away and called crazy or protecting her big-eared baby. There was even Susan Sarandon's Marmie from Little Women , who's basically the best freakin' mom in movie history. Yet in addition to those famous moms, there's one more who deserves our attention as well, especially with Mother's Day coming up fast: Mary, from Steven Spielberg's 1982 masterpiece E.T. The Extra-Terrestrial.

On the surface level, Mary might not seem like that great of a mother. Played by Dee Wallace, Mary, a divorced single mom, seems to have little control over her young kids. They curse at the dinner table and fake sick to skip school, and Mary's negligence seems so intense that she doesn't even notice that there's an alien living in her own home – or that her own daughter has been replaced by an alien under a sheet.

But when you dig a little deeper it starts to seem unfair to label Mary as a bad mom. Having gone through a painful divorce, Mary is left to raise her three young kids alone, and is doing the best she can despite the circumstances, something that many single parents can relate to all too well. Spielberg has explained many times that the inspiration for E.T. came directly from his parents' divorce, and Mary is the result of how, for many years, he blamed his father for their split and exalted his single mother. "It's still a mystery to me, but even though my mother was kind of like an older sister to me, I kind of put her up on a pedestal," the director told 60 Minutes in 2012. "And my dad was much more terrestrial, much more grounded, much more salt of the earth. And for some reason, it was easier for me to blame him."

Mary's alone, afraid, and struggling, yes, but can you blame her? She's raising three kids on her own, managing a career, and trying to return to the dating scene, all at once. The freedom she allows her children to have might be a bit much at times, but she's clearly trying her best and balancing a heavy load. Remember, too, that E.T. came out in 1982, right in the middle of the movement for women's lib and equal rights. The movie's inclusion of a multi-dimensional single mother so early in the game (Mary was one of the earliest, if not the first, cinematic single moms, Dee Wallace has claimed) allowed for more diverse family setups and representation on-screen later on, and it reflected many families' reality in a way that plenty of other mainstream films at the time did not.

Wallace herself has noted that over the course of her career, women have reached out to her about their similar experiences raising their kids as single moms, and so have children who watched their mothers go through similar struggles. "I have a lot of people tell me that," she said in a Cinema Source interview, speaking about the fact that E.T.'s depiction of Mary has affected many people. "It really gave them permission to accept themselves and love themselves. That they weren't outcasts just because they weren't in a 'whole family.'"

So while Mary may seem at first glance to be a bit of a mess, she's actually quite brave, and a hugely important character. Sure, she might be busy, a little distracted, and unsure of where to go or how to live post-divorce, but she's loving, nurturing, and, when push comes to shove, downright protective (just look at how she cared for a sick Elliott). Mary isn't your "typical" movie mom, per se, but she's worthy of acclaim all the same — and so this Mother's Day, when you're looking back at some of the most beloved fictional moms in film, don't leave this E.T. character out.