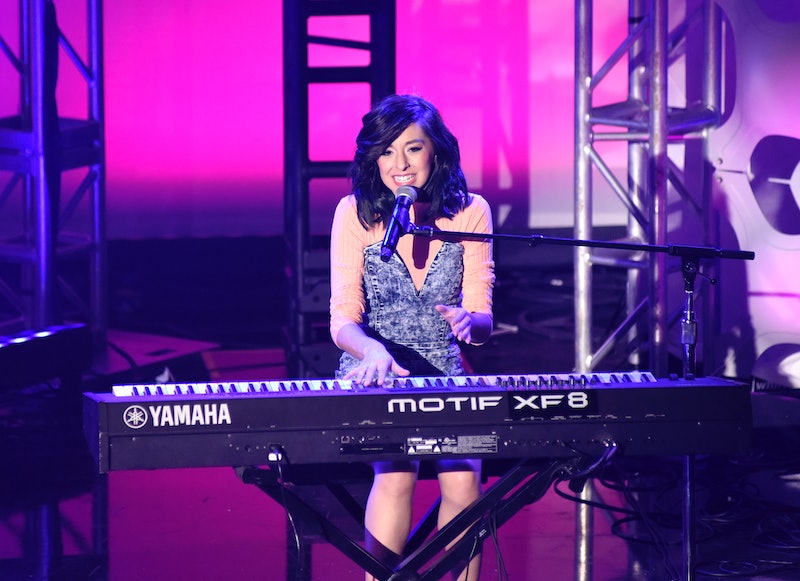 The Voice Season 10 is really heating up and former contestant Christina Grimmie tells Bustle that she remembers the pressure well. The now-professional singer finished in third place during Season 6 of the show in 2014. These days, Christina Grimmie's life after The Voice is incredibly busy as she's grown from being known as a YouTube cover artist to releasing EPs filled with her own original songs. Most recently, Grimmie released her EP Side A, toured with "Fight Song" singer Rachel Platten — and the 22-year-old former Voice artist reveals that another tour is in the works later this year.

"Being on The Voice was awesome and I feel like I've grown a lot," Grimmie says. "I've done things that I thought I'd never get to do. I've been able to come out of my shell a little bit more after just being on YouTube." Grimmie got her start as user zeldaxlove64 on YouTube, where she sang — and still sings — cover songs on the internet to an audience now made up of more than 3 million subscribers. Before long, she graced The Voice with her stunning cover of Miley Cyrus' "Wrecking Ball" in the Blind Auditions and the rest is history. Now, years after her seaso , Grimmie opens up about her life after The Voice and her new music in this interview with Bustle.

She Toured With Rachel Platten

Earlier this year, Grimmie toured with Platten, who The Voice finalist called "the bee's knees" and couldn't stop gushing about. "I couldn't have gone on tour with a better headliner," Grimme says. "Rachel is probably one of my favorite people to work with. She is so kind, and she always wants to make sure that you're comfortable and is always looking out for you."

She Released An EP Called Side A

Grimmie is proud of her emotional EP, which dropped earlier this year, and three of the four songs on it were produced and written by Grimmie herself. "I didn't think they were going to see the light of day because they were just my songs on my computer," she says. "It was good to go from The Voice, "Cliche," and "Shrug" to a more emotional place, because I haven't really done that."

If she had to pick a favorite off Side A, Grimme says she loves "Deception," a song that took her about a year to write. "I wrote the chorus a year ago and it was awesome, but I just didn't want to mess it up. I just had it sitting there and I'd come back to it a lot, but I didn't like where it was going," she says. "Until one day, I went through something kinda lame and I finished the song up in 10 minutes. It's my baby."

She Has An Upcoming EP, Side B

Currently, Grimmie is writing songs for her upcoming EP Side B, which she describes as the second part to Side A. "I want it to have the same essence of music, but I want [Side B] to be a little more upbeat and lighthearted, since Side A was more mellow and dramatic," she says. "But I also want it to flow all together."

Since Grimmie gained attention for her covers on YouTube and The Voice, and she says it's been quite a transition for her going from being a cover artist to introducing her fans to her own music.

When you're known as a cover artist, you kind of get locked in that and everyone only wants that from you. Then when you release original music, it almost gets you down, because everyone's asking for some covers. But, you can't force that. You have to keep doing your thing. It's a slow build for sure, but I want to say I've made that transition smoothly enough, and people realize I do have originals and I'm not just a cover artist.

She Has Advice For Current Contestants

Last season, Grimmie returned to The Voice as the Kohl's Style Insider, where she showcased the hottest fashions from the show — and contestants asked her for advice. "I loved being part of the behind-the-scenes of what everyone was going through," she says. "It was really cool, giving tips when people asked."

And her advice for current contestants? "I want to remind everyone that it's so easy to try really hard on that show. You want to be different, you want to be innovative," she says. "But, sometimes if you try really hard, it comes off very noticeable and that's happened to me before while I was on the show. Don't try to impress anyone and do what you want the world to see."

She Has Another Tour In The Works

"Fans will be able to come see me again," she promises. And, indeed they will. Grimmie recently announced she's touring with Before You Exit May through June. Clearly Grimmie isn't slowing down any time soon, and I'm sure her fans couldn't be happier about that.