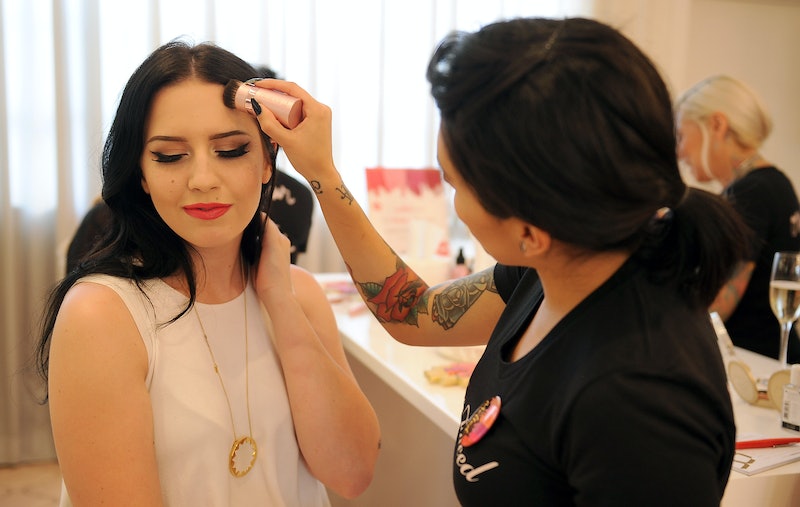 What. Is. This?! Once again, Too Faced founder Jerrod Blandino is the master of the social media makeup tease and of creating excitement. Too Faced's Chocolate Chip palette is coming and that is a beauteous thing. The brand has become known for its delish-smelling, maximum impact palettes, like the juicy Sweet Peach, the eternally yummy Peanut Butter and Jelly, and the decadent but calorie-free Chocolate Bar. Blandino posted the tease on his personal Instagram, rather than the brand's official IG. Thankfully, Blandino does this often, like he did with the upcoming Sketch Marker liquid liners. His Insta is a wealth of teases about new products, so I suggest throwing him a follow if you like advance looks at upcoming and new Too Faced items before they are officially launched.

Ok, back to the critical matter at hand. What, exactly, is the Too Faced Chocolate Chip Palette?

I can only analyze the clues and the hashtags that were part of the caption of Blandino's post. The white case looks a bit plain. But it could be an early generation. It could just be the base prototype or initial template. They could be working on dressing it up and evolving it.

Observe, Too Facers and makeupistas!

OK, let's pull the hard facts. It's coming in Spring 2017, so we have about a year to wait. Blandino also hashtagged it as #PurseSized and #FunSized, so that means it will be totally totable. He also suggested that it could be indirectly crowdsourced, since he noted that #YouAskedForIt and #IHearYou. So that would indicate that fans wanted a palette designed for on-the-go use and this is the response. Will it be eyeshadows only? A few shadows, a blush, bronzer, and a lip product? It could be anything. If it's designed to be purse-sized, I am thinking it might house more than shadows, making it super useful for travel.

Another logical assumption is that it will probably smell like chocolate chips or cookie dough or some bakery treat. The Too Faced food-themed palettes are always a delight to the nose and smell like what they are named after and designed for!

Also, the colors —be it shadows, blush, whatever— are always amazing. They mix and match, have rich color payoff, and offer endless color combos.

Fans are already excited and too to Twitter to express it.

It's definitely not a drill.

There is pretty much no way this palette can disappoint. It's Too Faced! It's Chocolate Chip-themed. While that part remains in question —I have no idea what colors will comprise the palette based on the initial idea of choco chips— I know I won't be disappointed because I never am with this brand.

More like this
42 Black Owned Fashion & Beauty Brands To Support Today & Always
By Mekita Rivas, Shea Simmons, Kui Mwai and Dominique Norman
"Transparent Eyeliner" Is The Perfect Summer Look For Makeup Minimalists
By Olivia Rose Ferreiro
TikTok's “Clean Girl Aesthetic” Isn't As Inclusive As You Think
By Tomi Otekunrin
Hailey Bieber's "Glazed Donut" Nails Are So Minimalist Chic
By Danielle Sinay
Get Even More From Bustle — Sign Up For The Newsletter