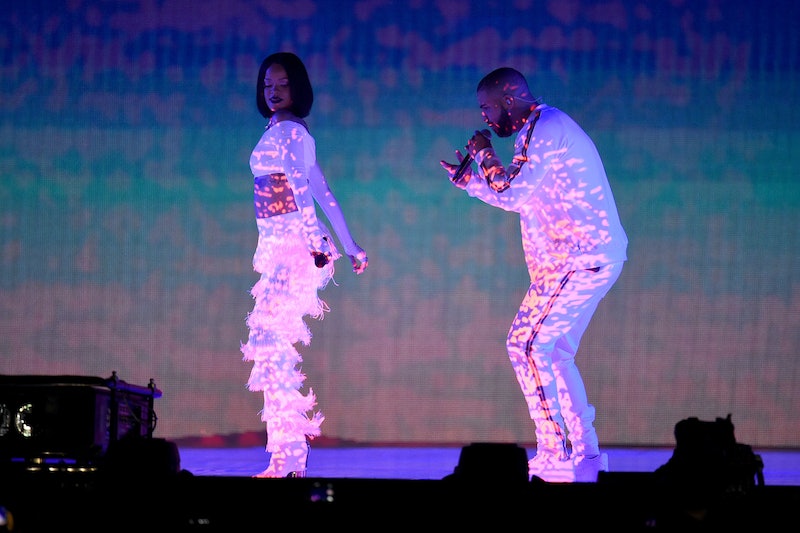 Thursday night was Kind Of A Big Deal, because the new Drake album Views debuted, and it was epic levels of good. Like, canceling date night, canceling best friend night and sitting at home with your headphones in playing it on repeat all night good. But while Drake may function as his own hype machine on how he's the biggest and the best, I don't totally buy it. Drake may think he's a lone wolf, but he's more of a team player — often stronger in collaboration with other artists or their work than he is working solo (the most obvious recent example of this is, of course, the Rihanna Drake collaboration "Work"). As such, it's no surprise that it's such a sample-heavy album, and it's no surprise that I am about to give you a rundown of all the samples on Drake's Views. Maybe you'll find a new artist you'll like.

He samples artists like Jamaican reggaehall artists Mavado and Serani, rapper DMX (kind of an unexpected choice, given how DMX previously dissed Drake on radio), British musician/artist/fashion designer Malcolm McLaren, Mary J. Blige, hip hop musician/producer Pimp C., Crazy Cousinz and Kyla, Popcaan, and the Winans. Yep. It's a rich musical tapestry and makes the album function better as an audio-collage than a traditional one man album. To me, it's a return to some of Drake's best work: when he uses other artists' songs to craft his own response to in a smart, nuanced way. Kind of like this delicate blast from the past:

So what songs exactly did he actually sample? Let's start with the first track sampled on the album, in "9":

Mavado and Serani are both huge in the dancehall reggae scene as well, as looking all sorts of great in white suits. No wonder they got sampled. Next up is DMX:

Drake lifts the chorus from "Hows it Going Down" to chill effect in "U With Me?" while sampling DMX's voice from "What These B*tches Want" in the intro. Even more unexpected than Drake sampling the guy who embarrassed him on radio is him sampling Malcolm McLaren:

Drake slices and dices up "World Famous" and sprinkles it all over "Feel No Way" like so much sexy confetti. On "Weston Road Flows," Drake's had enough of arthouse weirdness and decides to sample something a little more mainstream: Mary J Blige's smooth grooves on "Mary's Joint." Give it a little listen here:

By the time we get to "Faithful," Drake's ready to channel some seriously nostalgic nineties vibes. Who better to look to than the toast of toast of nineties hip hop, Pimp C.?

Things get a little tricky round about "Controlla." When the song leaked a few weeks back, it starred musician Popcaan. His part has now been mysteriously scrapped... and replaced with a sample of the following Beanie Man song. More on this in a few songs' time.

Why is "One Dance" so toe-tappingly danceable? Is that all Drake (as I'd guess he'd maintain) or would it have anything to do the sly sampling one of the catchiest songs of 2009, "Do You Mind" by Kyla?

Sometimes Drake comes off like a tyrannical despot: making illogical decisions right left and center for the hell of it. After bumping Popcaan off "Controlla," he amps up the awkward by sampling the artist's "Love Yuh Bad" at the end of "Too Good." I'm calling it: there's no way he's getting a Christmas card from Popcaan this year.

My favorite sample on the album is the following: Brandy, used to sickly-sweet effect on "Fire & Desire."

Drake showcases his softer side on "Views" by samplingThe Winans' "Question Time" in the song's intro:

Obviously (obviously!) Drake's a huge talent all by himself. But the above testifies to the fact that his music becomes richer, more powerful, more significant in tandem with other artists' work. So here's to the proof that Toronto's most solitary man is actually the ultimate team player — at least musically, if not romantically.

More like this
Drake’s Surprise Performance With The Backstreet Boys Was Fans’ Fire
By Stephanie Topacio Long
Britney Spears’ Honeymoon Plans Include Watching This Movie With Her Husband
By Grace Wehniainen
Rihanna Is America's Youngest Self-Made Woman Billionaire, According To 'Forbes'
By Hugh McIntyre
Adele Says It Would Be “Wonderful” To Have Kids With Boyfriend Rich Paul
By Jake Viswanath
Get Even More From Bustle — Sign Up For The Newsletter