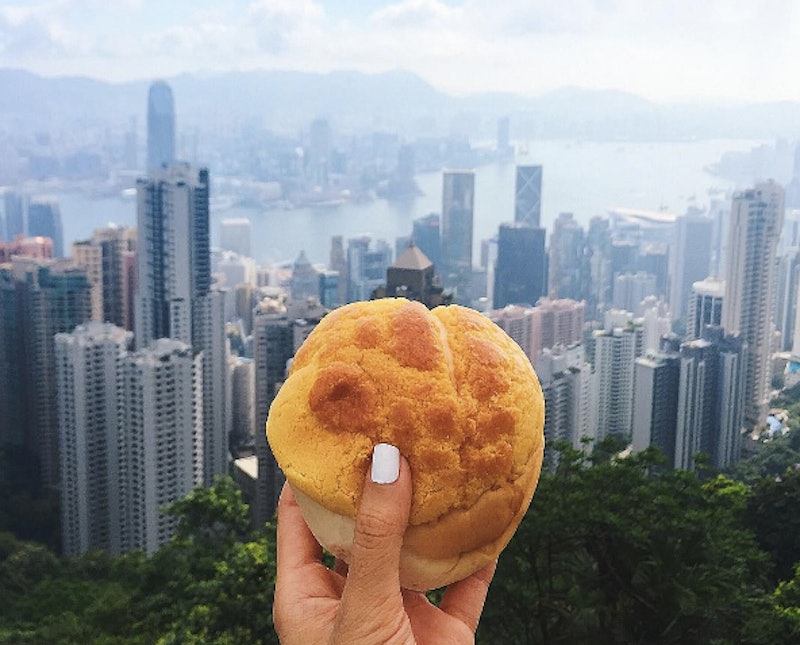 Listen up, anyone whose passions include food and travel: This is going to be your newest life inspiration. "Girl Eat World" is an Instagram of magnificent proportions, on which one blogger documents all the absolutely delicious things she tries, held up against the background of the different place in which she tries them. Basically, she travels the world, tries amazing food, and takes amazing pictures of the amazing food she's trying while traveling. It's a dream life, and it belongs to a woman named Melissa Hie.

Growing up, Melissa moved around a lot, but this was just the beginning of her lifelong love for travel. In 2009, she moved to Singapore by herself, without knowing a single person. She says she wasn't adventurous back then and that the experience taught her a lot, including how to travel on the cheap (to Thailand, Europe, and so on) as often as she could.

She says she visits one new place every year (at least), and in the meantime, she pursues her other passion: delicious food! It was only after a few years of traveling and eating that her fellow Instagram friend convinced her to create an account just for her food pictures. After a trip to Japan in May 2014, she decided to bite the bullet and get started. Alas, Girl Eat World was born!

The name itself came from a trip she took with her friend Serena to Rome. She wanted to have a photo taken in front of the Coliseum, but insisted that she couldn't stop eating her sandwich long enough to do so. The result was a funny image of her scarfing down her lunch with the Coliseum in the background. It was after that she thought it would be funny to do a collection of photos of herself eating in front of famous places, but felt a little too shy to ask strangers to take photos of her. The solution was what the account is now, which is just amazing foods in front of famous places... a lot simpler, and just as inspiring! Check out some of her most awesome shots below:

This snack is traditionally eaten during Hanami (sakura flower viewing in April) or Hinamatsuri (Girl's Day in March), welcoming the beginning of spring.

Melissa enjoyed a glass of white wine during the magical Sounds of Silence dinner with the view of Uluru.

"Bo lo bao" means "pineapple bun," but doesn't actually have any pineapple! It's normally eaten for breakfast, and sometimes served with a block of iced butter inside.

Koulouri (κουλούρι) is a cheap sesame bread ring that locals grab from street carts for breakfast every morning.

This photo was taken in Ölüdeniz, a popular beach destination in the Mediterranean.