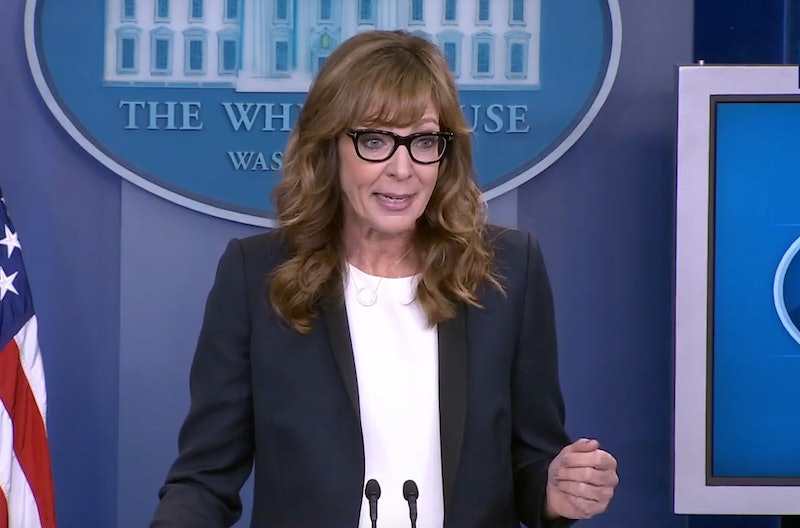 The West Wing's fearless press secretary, C.J. Cregg, made a real-life appearance at a White House briefing Friday, surprising reporters waiting for the real press secretary. Actress Allison Janney returned to the briefing room to bring awareness to America's opioid epidemic, brilliantly reviving her old character to get people's attention. "Josh is out today, he has, I believe, it's a root canal," she told the media, referring to President Obama's real press secretary, Josh Earnest. "But let's be honest, I'm better at this than he is anyway."

With seven years of experience acting as press secretary to President Bartlet, Janney knew exactly how to act behind the podium. "The president is still working on his jokes for the White House Correspondents' Dinner," she said. "I don't have any details on that other than he intends to be funny — very funny." When Earnest entered the briefing room to find Janney in his place, he told her, feigning shock: "This is not your show any more." After the actress apologized for taking over his space, he told her she might as well use the podium while she was there, allowing her to explain the real reason she reprised her role as the White House press secretary for a day.

"I'm here today to draw attention to the opioid epidemic and to celebrate those who are working to help others combat substance use disorder," Janney told reporters gathered for the briefing. She was there with Chuck Lorre, co-creator of her current show, Mom, about a newly sober single mom in California trying to improve her life. The issue is very important to both Janney and Lorre, which is why they travelled to the White House to see 10 people from across the country honored as White House Champions of Change for their work surrounding drug addiction.

"They've been selected from over 900 nominations for their leadership in preventing prescription drug abuse and heroine use and for increasing access to treatment and for supporting their fellow Americans in recovery," she said. "This is a disease that can touch anybody, and all of us can help reduce drug abuse through evidence-based treatment, prevention, and recovery. Research shows it works, and courageous Americans show it works every day."

Out of practice addressing a room full of press (real or fake), Janney stumbled over some words, joking, "I'm so nervous, I can't believe."

After her prepared statement about the nation's opioid problem, a reporter asked former Press Secretary Cregg who President Bartlet is supporting in the current Democratic primary, to which Janney replied: "I think you know the answer to that question." Obviously, the West Wing star hasn't changed a bit.

More like this
5 Ways To Stand In Solidarity With Women In America From The UK
By Sophie McEvoy
How To Fight For Reproductive Rights, Based On How Much Time You Have
By Courtney Young
The Families Of Grenfell Tower Are Still Waiting For Justice, Five Years On
By Bustle UK
Police Shove 'Full House' Star Jodie Sweetin At An Abortion Rights Protest
By Radhika Menon
Get Even More From Bustle — Sign Up For The Newsletter