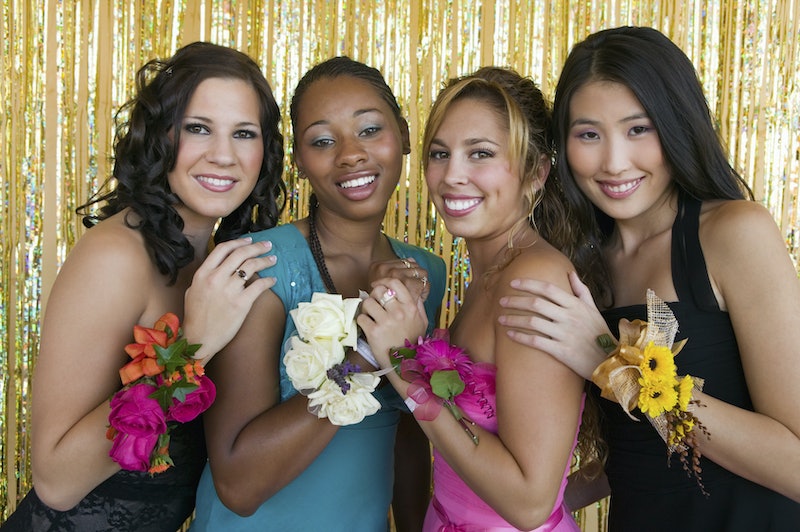 Prom is supposed to be an inclusive experience all high school students get to enjoy, but in reality, schools don't always accommodate everyone. There are many stories of homophobia, transphobia, and sexism hindering students' prom experiences. Fortunately, students have stood up to discrimination at their proms and defended their right to enjoy the experience regardless of how they identify.

With prom season in full swing, the Internet is full of promposals, dresses, and other celebratory aspects of the occasion. But it's also worth noting that the tradition has a dark side. Prom is often a time not just to socialize and have fun, but also to reward people for being straight and gender-conforming, encourage competition over what dresses girls buy and how they look, and perpetuate rape culture in a few subtle ways. For example, many students feel pressure to engage in sexual activity at after-prom, whether they're ready or not. Many also have been turned away for having dates of the same gender or wearing clothes that are "revealing."

Here are a few students who have taken a stand against oppressive prom conventions and challenged traditions that make the occasion less than inclusive:

1. Hayley Lack And Her Partner, Jenna

Lack and Jenna, a lesbian couple, were nominated as prom queens by their high school peers. However, the school allegedly wouldn't let them run. Lack said in a Facebook post that administrators would only allow the two straight couples nominated alongside her and Jenna to become prom king and queen. "They [the girls] are both able to run separately, but we don't nominate as couples. It's not fair to the boy gender," the school's principal told Mic, saying the policy was not to discriminate against LGBT couples but rather to give both boys and girls a chance at prom royalty. Lack is currently working with the American Civil Liberties Union to try to change her school's policy, and her peers have circulated a petition for "equality for same-sex couples."

Claudetteia Love, a lesbian high school student, says she was told she could not attend prom in the tuxedo she wanted to wear. Her school's principal told a local paper that the decision was not made because of her sexual orientation; the tuxedo was simply a dress code violation. However, after students circulated a petition and the school board president got involved, the principal changed his mind, and Love got to attend prom in her getup of choice.

Brittany Minder says she was turned away from prom because her school's dress code required clothing not to show cleavage. She said she went in after covering up with a shawl, as was required, but left after half an hour due to embarrassment. A school spokesperson told the local news station KOMO that they did whatever they could to help students "come up with a solution" if they weren't following the dress code. But Minder spoke out in an interview with KOMO, saying the standards imposed upon her were unfair. "In my opinion, I feel it's because I'm bigger chested and there is more cleavage that you can see, and there's nothing I could really do about that," she said. Her mom also chimed in: "All women are not created equal, and you cannot compare a golf ball to a grapefruit. It ain't gonna happen."

Ash Whitaker was allegedly prohibited from running for prom king because he is transgender. He told ABC that his school administrators would only let him run for prom queen. The 16-year-old accumulated 6,000 signatures on a Change.org petition, and his classmates held several protests. Eventually, the school released a statement saying that students can now run for the title that fits their gender identity.