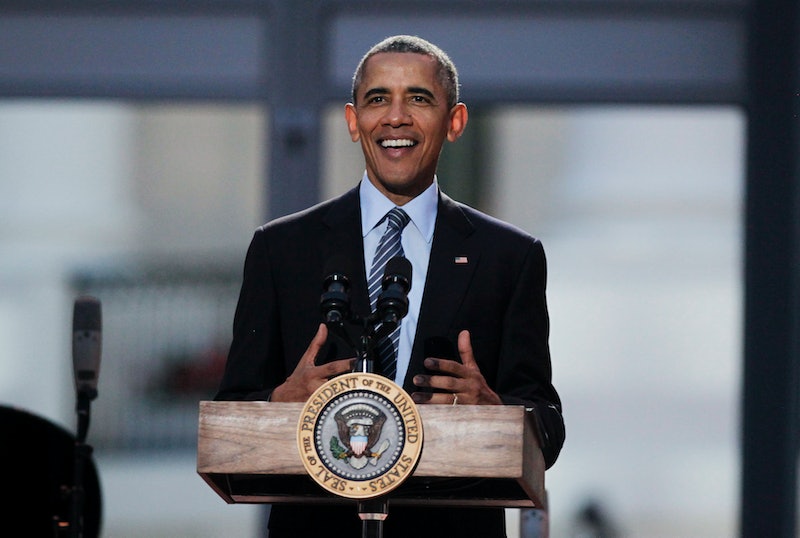 In case you didn't know, President Obama is a huge Game of Thrones fan. He even got access to the Season 6 episodes before the cast even did, according to Entertainment Weekly. So, it's not surprising that there was a Red Wedding joke in Obama's White House Correspondents' Dinner speech. Obama started off the joke by poking fun at Republican leaders who have been unresponsive to some of his policy attempts in recent months, particularly the fact that Obama's Supreme Court nominee Merrick Garland has not yet been confirmed. In case you didn't catch it, here's exactly what the president said: "You know who you are, Republicans. In fact I think we've got Republican senators Tim Scott and Cory Gardner, they're in the house, which reminds me — Security, bar the doors! Judge Merrick Garland, we're gonna do this right here, right now. It's like the Red Wedding."

Game of Thrones fans know exactly what that means. The Red Wedding started out as a marriage celebration and ended with Walder Frey sealing the exits and allowing the murders of the entire Stark family and army in attendance. Obviously Obama's joke wasn't a suggestion that the Republicans in the room be murdered, but he did seem to be suggesting that he wasn't gong to let them leave until they listened to him and did what he wanted — in this case, confirm Judge Merrick Garland. The joke didn't get an uproar of laughter, rather a sort of awed murmur, likely because the Red Wedding was a pretty violent association to make at a political dinner.

But, I can't blame Obama for wanting to work Game of Thrones into every conversation he has — Season 6 has just begun, and it's all I want to talk about too. I just hope that there won't be a Red Wedding-type event this season. I can't handle losing any more of my favorite characters, and I'm sure Obama can't either.