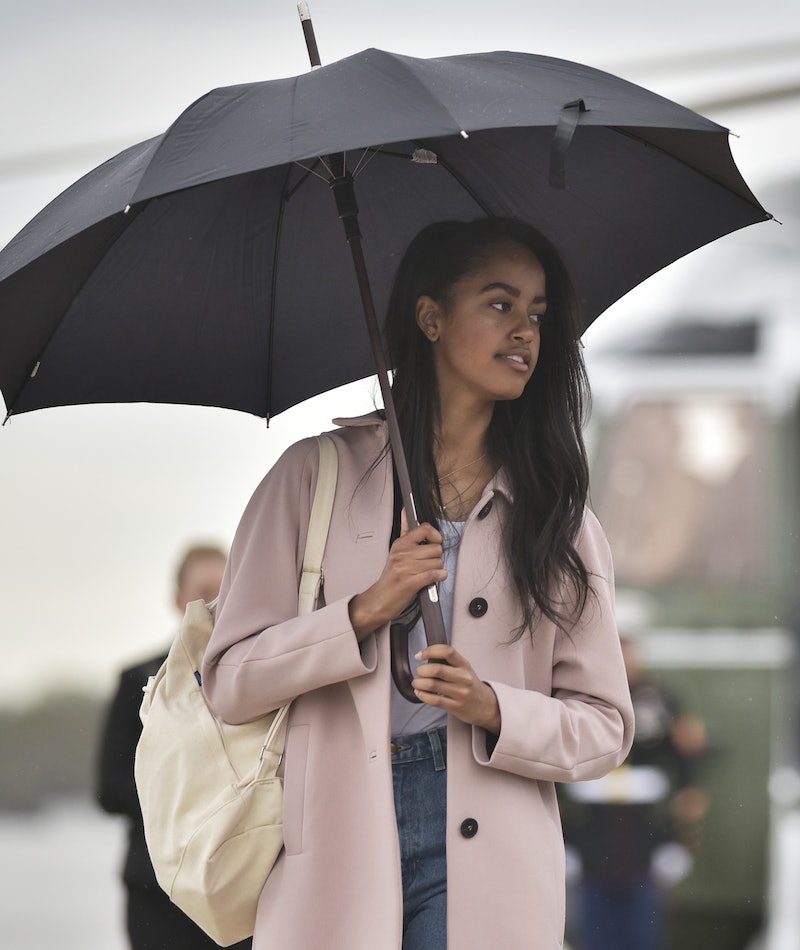 Just hours after her father's final White House Correspondents' Dinner address, it was revealed that Malia Obama will attend Harvard University in 2017 after taking a year off, the AP reports. In a statement from the White House, the president's family revealed that Malia will take a gap year, otherwise known as a year to work and travel prior to deferred entry to the college of her choice, before beginning at Harvard next fall.

The rare "Statement from the East Wing" comes after Obama's epic "mic drop" moment — "Obama out" — at his final White House Correspondents' Dinner speech. During the speech, Obama noted publicly that he and his family would be sticking around in D.C. for a couple of years after his presidency, presumably to let Sasha finish out school.

Malia will be a member of the Class of 2021, the White House said Sunday in a statement. It had previously not been known which colleges had accepted Malia's application, although rumors flew that she would be attending Harvard after she was pictured wearing a Harvard T-shirt at her school class day.

"The President and Mrs. Obama announced today that their daughter Malia will attend Harvard University in the fall of 2017 as a member of the Class of 2021. Malia will take a gap year before beginning school," read the statement.

Although the White House didn't offer details as to what Malia's gap year would consist of, the "gap year" option has long been popular in Europe, and is gaining a foothold in the United States. It offers recent high-school graduates the chance to work and travel — often in remote parts of the world — for a full year without compromising their sought-after places at college. For teenagers who want to travel and see the world for themselves, but are still enthusiastic about attending college, it offers valuable life experience before entering a three or four-year program.

Harvard itself encourages the option of a "gap year," suggesting that it wants its incoming students to be well-rounded and have gained skills from working or traveling abroad before joining the university.