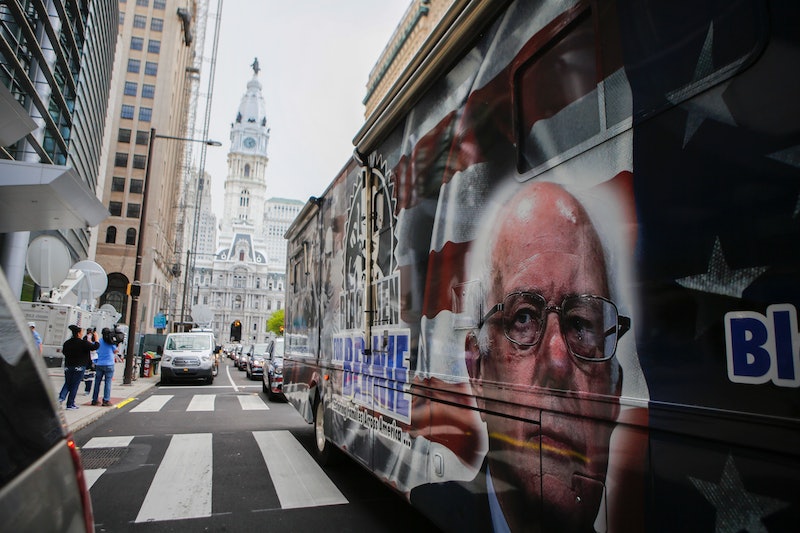 Democratic presidential candidate Bernie Sanders has long denied any desire to cash in his campaign clout to become frontrunner Hillary Clinton's running mate. But is Sanders changing his tune now that a lead of 327 pledged delegates has a Clinton nomination looking more and more likely? The Vermont senator issued a statement after losing four out of five states to Clinton in the Acela primaries last week, and it has people wondering if Sanders changed his mind about being Clinton's vice president.

In an official statement issued late last Tuesday by his campaign, Sanders acknowledged the obstacle closed primaries has presented him and urged the party to look toward unifying the party with its presidential campaign ticket.

I am proud that we were able to win a resounding victory tonight in Rhode Island, the one state with an open primary where independents had a say in the outcome. Democrats should recognize that the ticket with the best chance of winning this November must attract support from independents as well as Democrats. I am proud of my campaign’s record in that regard.

The New York Times claimed that Clinton was cautiously beginning to consider potential running mates prior to the Acela primaries, citing Sen. Elizabeth Warren as one of many names currently under discussion. Debate over the likelihood of a Clinton-Warren ticket increased when Sanders hinted that his own shortlist also included Warren last Tuesday on MSNBC's Morning Joe. The Massachusetts senator has not endorsed either candidate.

One name reportedly not on Clinton's shortlist? Sanders.

Jane Sanders dismissed rumors that her husband wasn't on Clinton's list of potential running mates during an interview with Neil Cavuto on FOX Business Network last Thursday. According to Jane, it would be "insulting" for either campaign to name the other candidate as a possible VP pick while both are still pushing ahead in the primaries.

Yet Sanders appears to have softened his tone just a tad when it comes to fielding questions about joining forces with his competition for a Clinton-Sanders ticket in the general election. Early in the primary, the senator firmly shut down questions about his willingness to trade in his campaign for the job of vice president, but in an interview with Chris Hayes on All In, his resolve seemed to have relaxed. "Right now we are running as hard as we can to win this thing, and at the end of the process, we'll take a look at what's going on," Sanders said. "Right now, my job is to get as many delegates as possible and try to win the nomination for president."

While Bernie may be shifting, a Clinton-Sanders ticket seems unlikely, especially given rumors that the Democratic frontrunner is mulling Warren as a potential running mate. The Clinton campaign likely floated Warren in an effort gauge how effective the idea would be at luring Sanders supporters. Although Clinton has said she'd welcome input from Sanders should she be named the party's nominee, I don't think their disagreements would make for the most collaborative or cohesive work environment.