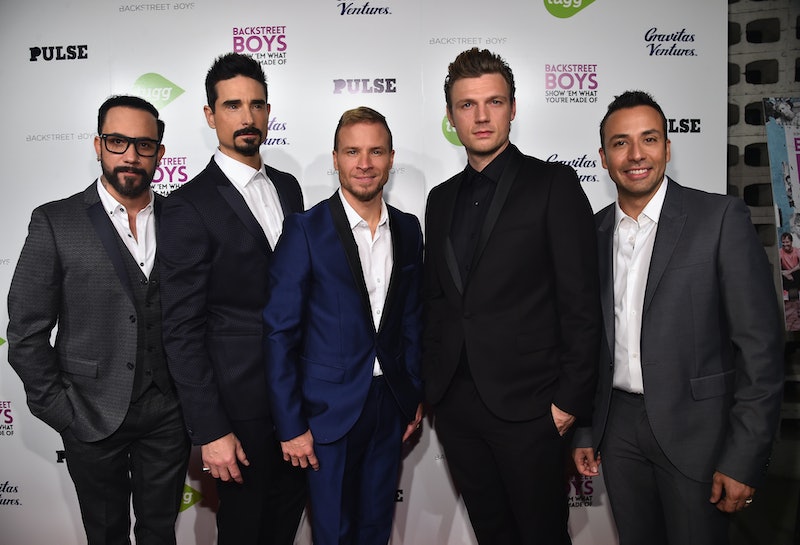 Happy May 1, or as many of us have started to call it, the day after NSYNC Day, thanks to that iconic "It's gonna be May" meme. The day is celebrated every year. but this time around, a rival boy band has decided to get it in the mix and switch things up. Yes, really — the Backstreet Boys have started a "feud" with NSYNC over those May-themed memes, and it is epic.

If you're unfamiliar with the "it's gonna be May" meme (and how is that possible?), here's some explanation. Long ago (aka 2000), NSYNC, including a young, curly-haired Justin Timberlake, crafted a song about how they were the right choice for this one girl and called it, "It's Gonna Be Me." Yet JT sang this song with a slight accent, making it sound more like, "It's gonna be May." Insert the birth of the internet as we know it a few years later, and you have yourself what the kids are calling a "meme." Every year on April 30, all-Mays eve, the internet becomes rife with NSYNC memes of the boys singing "It's Gonna Be May," and it is wonderful.

This year's celebration was better than ever, as Timberlake actually called attention to the meme on April 30 in a truly hilarious way. Wrote Timberlake,

But just one day later, on May 1, his former band's rivals, the Backstreet Boys, chose to chime in, and with this boy band meme war, everyone's younger (and current) selves are freaking out in a major way. Check out what the Backstreet Boys had to say:

How great is that? My only issue with the meme, which shows Nick Carter singing his heart out to the caption of "As Long As You Love May", is that the whole point of the NSYNC meme is that it's making fun of the accent Timberlake put on the word May. "As Long As You Love Me," meanwhile, doesn't feature this kind of vocal stretch. I like the witty lyrical wordplay of Backstreet's tweet, but I'm not in love with it because its a bit of a stretch. But hey, I'm just being nitpicky here. There's a lot to appreciate about this tweet and the "feud" that's beginning. The next step? A Backstreet-NSYNC dance battle. Only then will all be well in my world. Come on, guys, let's make it happen, for the good of everyone.