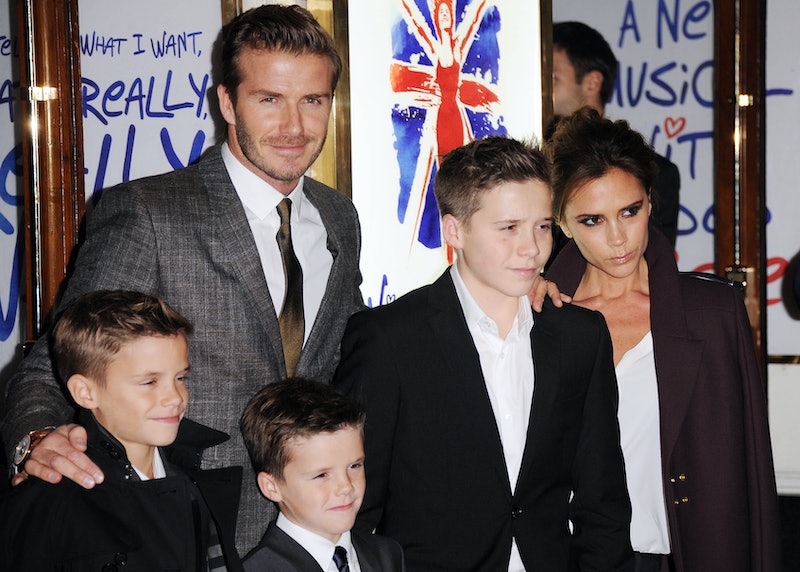 I remember learning to drive, and all the challenges and excitement that came with. But mostly, I remember my parents' horrified reactions to my unskilled driving, because they still won't let me live it down. As it turns out, fame does not absolve you from this embarrassing, awkward, and panic inducing right of passage, at least if the Beckhams have anything to say about it. Right now, Victoria and David Beckham are teaching 17-year-old Brooklyn how to drive, and their reluctance hilariously mirrors every parents' reluctance to let their teenage kid take the wheel, ever.

For real, though, the Beckham parents are hilariously and endearingly super normal about the whole thing, as shown by the photos each star has posted. There's no prize-winning driving instructor, they didn't close down a boulevard for him to cruise down, and there's not even a safety harness (which I know my mother would have bought if she had A-list celebrity kind of money. The Beckhams are simply teaching their teenage kid how to drive, and freaking out like all parents would at that milestone.

It appears that both Victoria and David are not only having a minor crisis over the fact that Brooklyn is dealing with the dangers of driving, but that he was their first baby and somehow, in front of their eyes, he's gotten grown up enough to do so. Yet despite their slight melancholy and fear, the duo seem happy and proud to teach their son the act or driving all by themselves, which is undeniably one of the most endearing aspects of this entire situation.

On the bright side for the "nervous" parents, it appears that the Beckham family is in London. Which means that the two British natives can at least alleviate some major American traffic rule fears by teaching their son how to drive on the "right" side of the road (to them, at least).