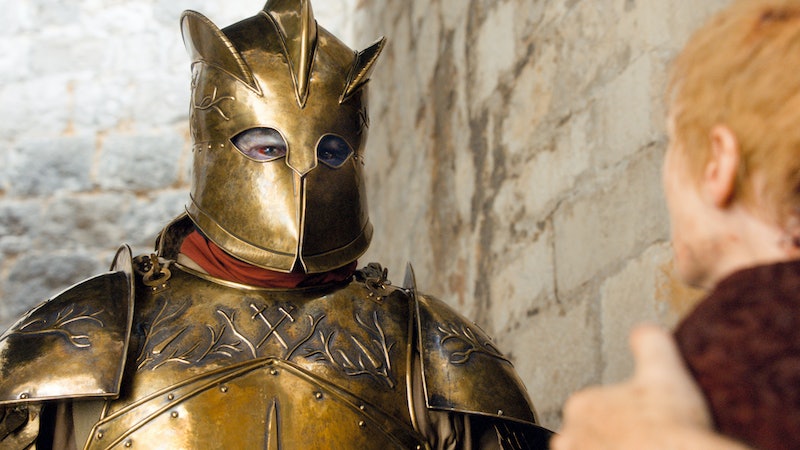 Gregor Clegane broke Game Of Thrones fans' collective hearts last season when he crushed Oberyn Martell's skull like an egg during Tyrion's Trial By Combat. The enormous brother of The Hound (R.I.P?) was mortally wounded during the fight but Qyburn, a disgraced former maester, reanimated him to become The Mountain, Cersei's new bodyguard. In the second episode in Season 6, we finally got to see what he could do. After a random man was shown bragging to a crowd on the street about a fictional fling with Cersei (and being really lewd about it), we saw The Mountain make his first Game of Thrones kill with a swift punch to his head in the name of the Queen Mother.

Qyburn did say that the new and improved Mountain will literally demolish everyone who has ever wronged Cersei, at her request. That's a seriously intense oath. Viewers will hopefully get to see a little reign of revenge for the shamed queen. While Cersei is definitely a huge villain with very little in the way of redeemable qualities, I am still ready for her to get some revenge after that shame walk from last season. She could possibly send him after the High Sparrow or Lancel Lannister. Hell, I even want to see Zombie Moutain tangle with the lady who rang the bell and chanted, "Shame."

Who else will The Mountain take out for Cersei? I'm sure she has a list of people for her new toy to take of for her. I'm eager to see the carnage that awaits us at his hands.