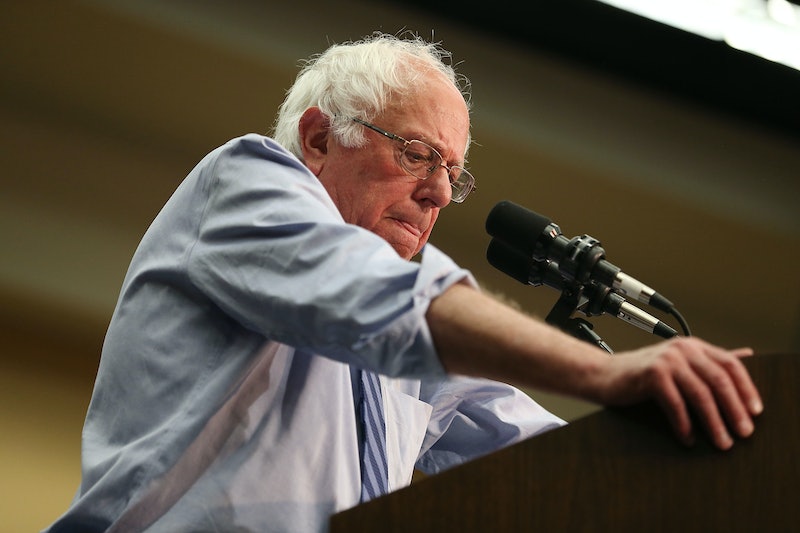 What is a Bernie Sanders supporter to do? Nearly a week after hinting that his chance at the Democratic was nomination was diminishing quickly, Sanders hit back strong on Sunday in a news conference claiming the fight was not over. But it is. Sure, the superdelegates are undemocratic, but Clinton is easily winning the pledged delegate race too. Now matter how you slice it, she should come out June 14 ahead. Using Sanders' own words, that is "a tough road to climb," especially with a downsized campaign staff. So what should Sanders supporters do now that their favorite messy haired anti-establishment socialist is essentially out of the race?

One thing they should not do is get behind the other outsider with the hairspray problems. In some alternative reality, Donald Trump's campaign manager Corey Lewandowski (yes, the one charged briefly with simple battery) suggested that Sanders and Trump have a fair amount in common. CNN reported that he even said the Trump campaign is ready to incorporate Sanders voters into the Trump movement:

You have two candidates in Donald Trump and Bernie Sanders which have reignited a group of people who have been disenfranchised and disappointed with the way Washington, D.C. and career politicians have run the country. ... Bernie Sanders has large crowds — not as large as Mr. Trump's, but large crowds — and so there is a level of excitement there for people about his messaging and we will bring those people in.

That's a long shot, and draws parallels between the two groups of supporters that don't make sense. Both candidates may be anti-status quo, but Sanders has a real plan to improve the lives of working class Americans. Even if Trump and Sanders supporters are frustrated to the same degree, voters who "feel the Bern" know that Trump cannot make America great again. He supports the wrong set of policies. Medicare for all, free college, and a $15 minimum wage draw Sanders' crowds — not some cult of personality.

Step 1: Vote In The Primary

So here's a step-by-step guide: First of all, vote! Just because he won't win, doesn't mean it's not worth voting for him in the primary. If your state hasn't headed to the polls, make sure to do so on election day. Like Sanders said in his statement last Tuesday night, a vote for him is a vote for a progressive Democratic party. He wants to head to Philadelphia with "many delegates as possible to fight for a progressive party platform." The delegates do not just choose a president, they set the party's course for the general election in November.

Second of all, get involved with the fight to win back Congress. Gideon Resnick for The Daily Beast covered a group of Sanders supporters that began a PAC called Brand New Congress. Their goal is to elect candidates up and down the ticket that support progressive legislation like a carbon tax to fight climate change and more controls on big banks:

America needs an honest, accountable Congress to enact Bernie's program. So let's run one campaign to replace Congress all at once (except those already on board) that whips up the same enthusiasm, volunteerism and money as Bernie's presidential campaign.

They're focused on supporting a Sanders administration, but their fight for Congress needs to happen no matter who's in the White House. Obama has been hamstrung by Republican obstructionism since Democrats lost the House in 2010. Don't think that they'll treat any other Democrat better.

Finally, and this is the most important. Keep a vote for Clinton in your back pocket. I know she might not be your preferred candidate, but vote in the general election anyway. If you followed step two, you'll already be excited about turning the House blue and voting out that really annoying Republican senator that's been representing your state since before you were born (*cough*, Chuck Grassley, *cough*). Vote for the Democrat's nominee, whoever he or she may be. That will not only keep Trump out of the White House, but it will ensure that the Supreme Court stays balanced — or even better yet — has a few more friendly faces.

So: follow these three steps. It may not result in Sanders winning the White House (unless of course you blow step 1 out of the park), but it will be a step in the right direction.