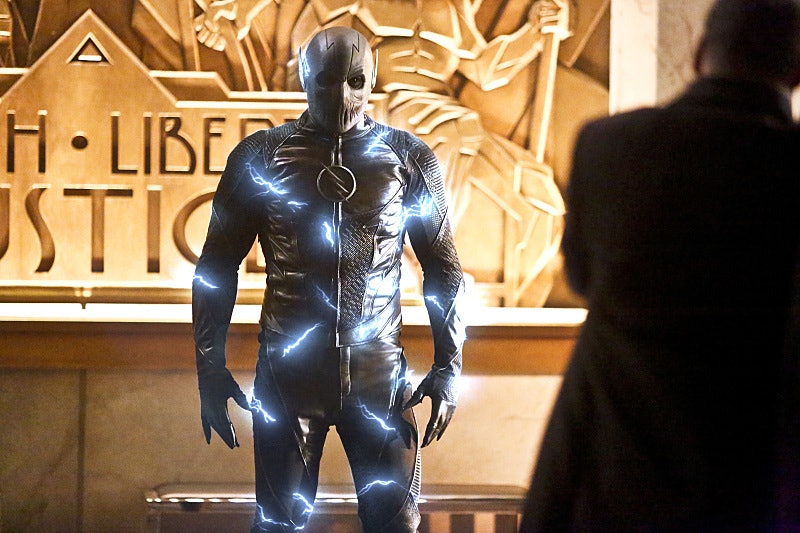 Just when you thought that TV had exhausted all the possibilities of multiple identities, along came The Flash to entertain and confuse fans with Zoom, a villain who's taken advantage of both multiple universes and time travel. The Hunter Zolomon/Jay Garrick Zoom conundrum has also been confounding the S.T.A.R. Labs team all season; Barry Allen and his friends have been missing some basic information about who exactly they've been fighting. The episode "Versus Zoom" answered some of those questions, but since the season finale is still three episodes away, I'm guessing not all. The many names and personalities of Hunter and Jay could trip up even the most attentive of viewers. So for organization's sake, how many Jay Garricks and Hunter Zolomons have appeared on The Flash so far? Enough to keep Barry and the rest of the gang scrambling, that's for certain.

In "Versus Zoom," Team S.T.A.R. Labs learned that the man who'd been threatening Barry's life and sending Earth-2 metas into the breach after him was actually Earth-2 serial killer Hunter Zolomon. Harry recognized Zolomon as one of that universe's few perpetrators of multiple murders — those are a rarity over on Earth-2, so Zolomon stood out. An anomaly during Zolomon's electroshock therapy turned him into a speedster, but one without the enduring morals and sincerity of Barry Allen. At first, Zolomon seemed intent on using his powers for good and so he assumed the name of Jay Garrick, golden boy and shining hero. Or maybe he did that to gain the trust of Earth-2 while he honed his powers.

Zolomon arrived on Earth-1 in the guise of Garrick, to whip Barry into Zoom's ideal opponent. Ironically, Barry was wary of Jay and his motives; Jay patiently proved himself by counseling Barry and subtly wooing Caitlin. (Those feelings seem to have been real on his part, to some creepy degree.) Zolomon will clearly stop at nothing to beat Barry; going so far as to sacrifice his past self, aka the Jay who the S.T.A.R. Labs team saw murdered before they could close the last known breach between the realities.

If Zoom was telling the truth about his origins and evil speedster activities, then Earth-2's Hunter Zolomon and Jay Garrick are the same person. Zolomon admitted that the biggest mistake he made during his long con was to tell Caitlin about the existence of his Earth-1 doppelganger, also named Zolomon. But the saga continues and Zoom's story still has a few holes.

First of all: who is the man in the mask in Zoom's lair? It's important to Zolomon's plan that his identity remains hidden. When Barry was imprisoned alongside him, the man tapped out "Jay" on the wall of the enclosure. Was that a warning or an introduction? I'm willing to bet that Teddy Sears will be playing that character too, once he's finally unmasked.

The below tweet from showrunner Greg Berlanti supports the theory that the "real," good Jay Garrick is still at Zoom's mercy. (Is that Earth-1's Zolomon, perhaps?) In response to fan ire about the evilization of comic book good guy Garrick, Berlanti assured viewers that it ain't over until it's over.

By the time the sophomore season of The Flash is over, even more Jays and Hunters may enter the fray.