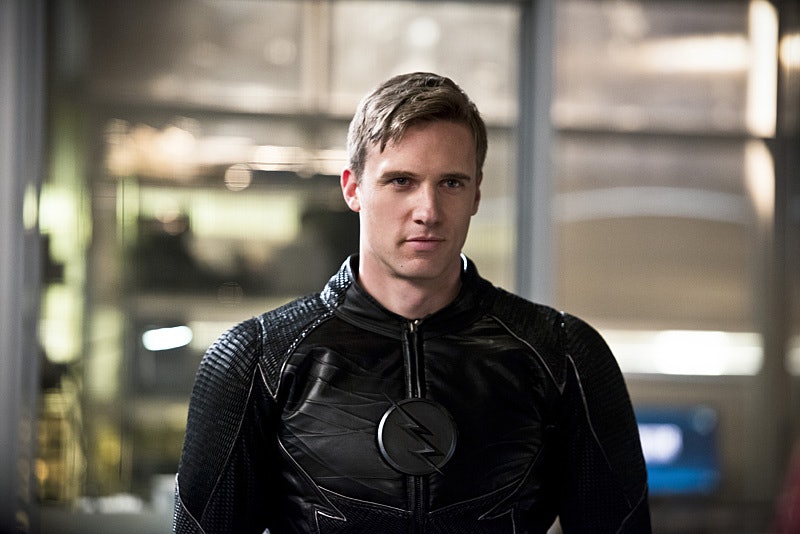 OK, let's dive into these reveals a little bit more, starting with what we learned about Hunter Zolomon's back story in the most recent episode of The Flash. It was here that we learned Hunter is from Earth-2 and witnessed his father murder his mother as a child (in a back story startlingly close to Barry's own) which led him to become a serial killer. Then, after becoming a speedster, Hunter played the part of the hero Jay Garrick because it was "fun" — and he presumably established himself as Zoom at the same time. But, Hunter is a bad dude and he wanted more speed, so he began to experiment with Velocity 6, which started to kill him. Then the singularity opened between Earth-2 and Earth-1, which gave him access to a whole new world of speedsters whose speed he needed to steal in order to stay alive.

Here's where it starts to get tricky. Hunter traveled to Earth-1 after the singularity opened in the show's season 1 finale in order to surveil their version of The Flash. But, when he realizes Barry doesn't have enough speed, Hunter dons the persona of Jay again in order to infiltrate the S.T.A.R. Labs team and help Barry get stronger. Everything is going fine until Caitlin digs into Hunter's health and realizes he's dying, then digs into Jay Garrick's Earth-1 doppelgänger to realize he doesn't exist. Now, Hunter gets ahead of Caitlin and shows her the Earth-1 version of Hunter Zolomon, attributing the different names to the differences in their universes.

Still with me? Because it's about to get even trickier. When Barry, Cisco, and Harrison Wells travel to Earth-2, Hunter realizes he can't be in two places at once and travels back in time to grab a previous version of himself to take on the persona of Jay on Earth-1 — who Hunter/Zoom later kills through the breach — leaving him free to be Zoom on Earth-2. So, basically, Jay Garrick hasn't really existed on The Flash; as far as we know right now, it has always been some version of Hunter. However, that doesn't mean we haven't seen the real Jay Garrick on The Flash.

After fans reacted negatively to the reveal that the Jay we've seen on The Flash was evil all along (since it goes against the character's comic book legacy), executive producer Greg Berlanti tweeted that the show would never make Jay evil. So, it seems we will be seeing the real Jay Garrick stand up on The Flash, and I have my suspicions we've actually seen him already. Remember the man in the iron mask being held in Zoom's lair on Earth-2? He tapped out the name "Jay" to Barry and seemed to grow frustrated when Barry assured the man Jay was safe on Earth-1. Perhaps the man was referring to himself instead and, if he was, we can probably assume Jay looks the same as Hunter Zolomon considering Zoom's choice of headwear for the prisoner.

Of course, that brings up entirely new questions. For instance, if Jay Garrick is a real person on Earth-2, does that mean Hunter stole his identity, and if so, why do they look exactly the same? Or, if Jay Garrick exists on Earth-2, why doesn't he exist on Earth-1? Unfortunately, it seems the mystery of Hunter and Jay hasn't been fully revealed just yet, so we'll have to keep watching The Flash to figure out how all the pieces of this puzzle fit together.