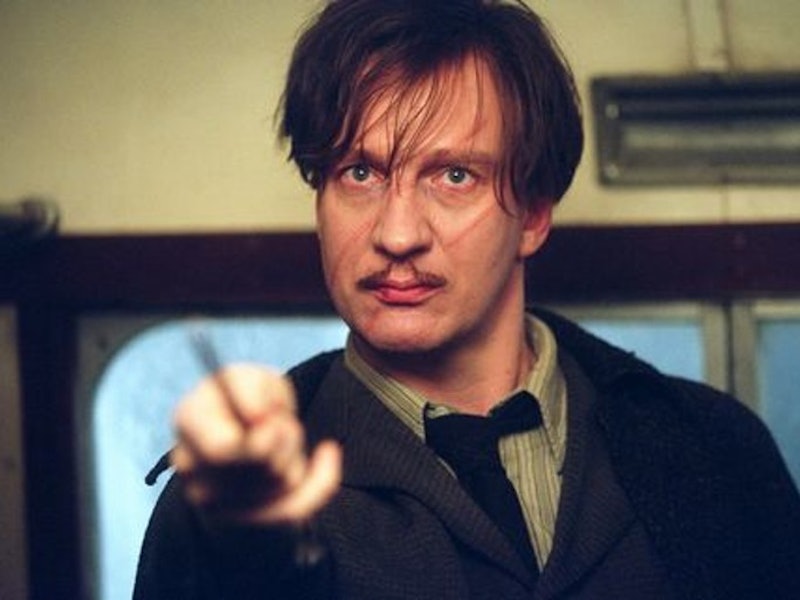 Well everyone, it's May 2, aka the anniversary of the Battle of Hogwarts, aka International Emotionally Compromised Nerd Day. True to form, J.K. Rowling marked the holiday by taking to Twitter to deliver yet another metaphorical knife twist in our bleeding post-Potter wounds — this time when Rowling apologized for the death of Remus Lupin. And just in case you were ready to accept her apology at face value, she then continued to tweet some #darktruths around his death that are going to raise your blood pressure high enough that you'll need a visit to Madame Pomfrey for a Calming Draught, STAT.

Rowling has talked about this before, of course, but on this day of all days it seems especially brutal to remind the fandom that initially, she did not intend to kill Remus Lupin. In fact, it was Arthur Weasley who was going to bite the dust in the fifth book, when Nagini went to town on him. As we all know, Mr. Weasley was spared — and somehow in the majestic, beautiful brain of J.K. Rowling, this meant that Remus Lupin would have to die instead. I would accuse Rowling of playing god, but ... I mean. She basically is one. So fair enough.

Here are some tweets to get you Monday wrecked, and all of the sadmotions you will feel throughout:

Like, OK. That's sweet of her. Thoughtful. Considerate. Those of us who woke up this morning in a blanket of Potter-related grief felt a smidge validated.

At least we did until approximately one millisecond later, when ...

First off, no tweet ever began with "in the interests of total honesty" and ended well for a Potterhead. Second off — what?!

Like ... she decided as early as book one that there were going to be Horcruxes and Hallows all sorts of cryptic, beautifully staged things that would come into play later on, but she hadn't decided whether or not to kill everyone's collective husband in this fandom?!

Oh, but friends. It gets worse.

BACK THE BUCKBEAK UP. "ARTHUR LIVED, SO LUPIN HAD TO DIE"? That's like me saying "I had banana pancakes this morning, SO I KILLED A WEREWOLF." It does not connect. It does not compute. Quite frankly, in the words of Lupin himself:

You know what, I woke up this morning on the 18th anniversary of the Battle of Hogwarts with an open mind and an open heart, but now more than ever I thirst for vengeance on behalf of one hot, brooding, nerdy werewolf. If you think y'all are having a rough time with all the planets in retrograde this month, consider all the nonsense J.K. Rowling put poor Lupin through — turned into a werewolf as a kid, never able to hold down a job, forced to watch all of his friends die, convinced he is unworthy of love, gets to be happy for LITERALLY TWO MONTHS before he gets murdered, THE END. Quite frankly, in the grand scheme of things, she has a lot more to apologize about re: Remus Lupin than just his untimely death.

This is all dead to my ears, though, until I hear a proper apology for the death of little Colin Creevey. In case you were wondering, the title of my future memoir is Harry Potter And The Time This Fandom Had No Chill.