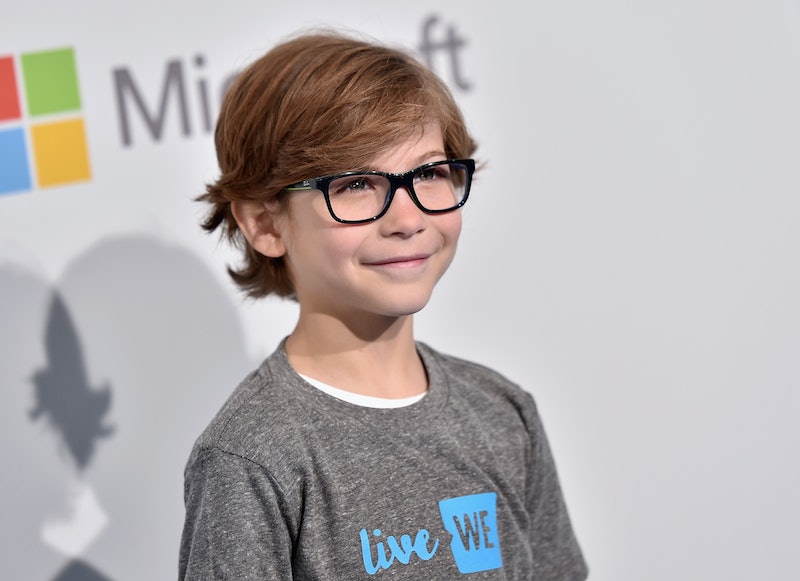 After stealing every scene in Room as a wide-eyed child held in captivity with his mother, Jacob Tremblay seems capable of taking on any role imaginable, no matter the challenge. The 9-year-old actor has already played a Smurf-loving toddler and a young Will Forte since taking on the Oscar-winning film, and his upcoming parts include the lead in a horror film and a grieving child. Yet these roles, while certainly diverse, might all be preparation for Tremblay's dream role — Iron Man, the beloved superhero and face of the right side in Captain America: Civil War , at least according to the actor.

"I think that if I could be any superhero, it’d be him, because he’s really cool," Tremblay tells Bustle while at New York's Hershey's Chocolate World. "You know why? Because he has all this cool armor, he has a bunch of missiles that he can shoot, and he can fly... he has so many different suits, too. It’s like a billion different suits."

With that much love for the hero, it makes sense, then, that Tremblay tells me he's completely Team Iron Man in Civil War — meaning, for those of you unfamiliar with the superhero movie, that he's in support of the Avengers signing a treaty that'd let the government control when and how they use their powers. Although many people are on the side of Captain America, who believes that signing the treaty is akin to the Avengers giving up total control, Team Iron Man has a solid amount of support — including that of one notable child actor.

And while the rest of the public will have to wait until the movie's May 6 release to determine which side they're on for themselves, Tremblay has already seen it (as shown in the photo above), and is eager to share his opinion. "I loved it," he tells Bustle. "It was so good. It’s really funny, too."

That's high praise coming from an actor who's starred in Funny or Die videos and been the subject of countless GIFs, thanks to his habit of giving amazing one-liners every time he steps on a red carpet. So if you're gearing up to see Civil War, know that it's already gotten the Tremblay seal of approval — and that, at least in his eyes, Iron Man is the only side to support.