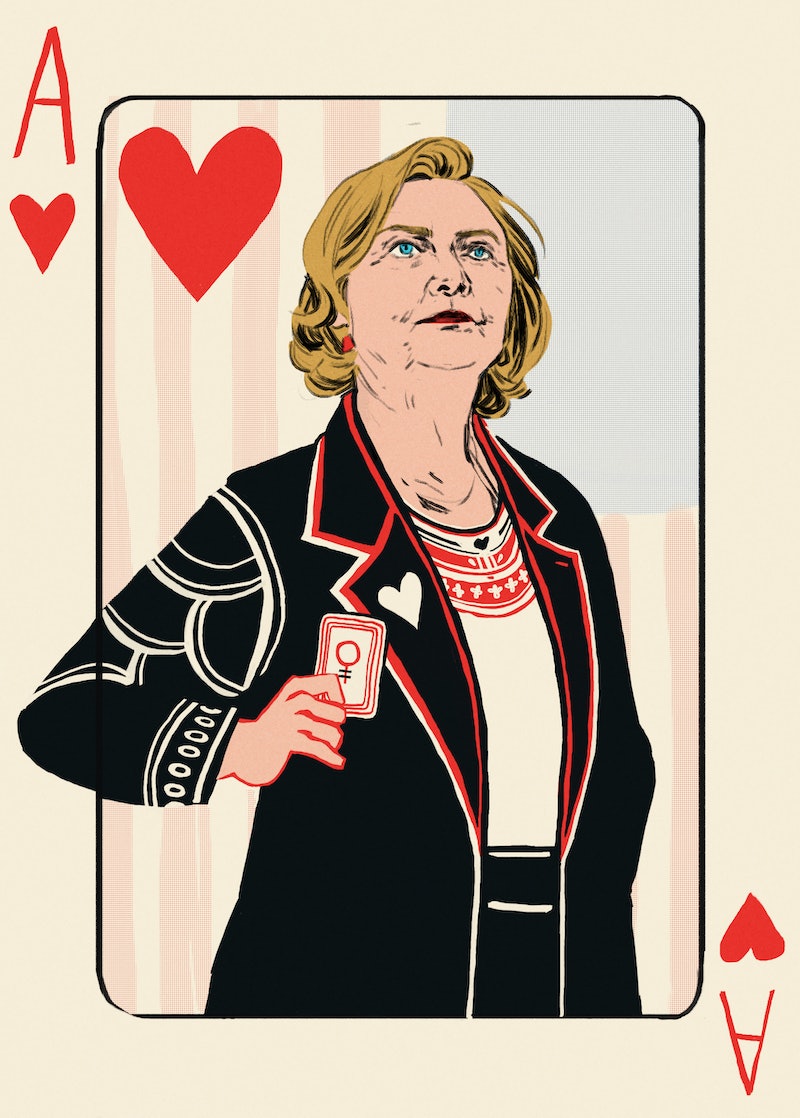 After Donald Trump accused Hillary Clinton of "playing the woman card," Zach Wahls had a thought: If there were a "woman card," what would it look like? So he called up his artist sister, and between the two of them, they brought the idea to life — literally. Even better, you can now order Zach and Zebby Wahls' Woman Cards on Kickstarter. Aside from making a pretty great pun on Trump's "woman card" comment, these literal woman cards combat sexism by featuring a different woman on each number drawn by Zebby Wahls, an art student at the University of Iowa and an illustrator for The Daily Iowan.

Zach Wahls, co-founder of Scouts for Equality, tells Bustle over the phone that though the project started off as a joke, he and his sister are quite serious about creating high-quality playing cards. "We're currently looking at linen card stocks, the kind you get at a professional poker tournament," he says. And it looks like they can afford to: As of this writing, the project has raised nearly $35,000 on Kickstarter — seven times the team's $5,000 goal. And with 29 days still remaining in the campaign, it's likely that they'll continue to raise even more. Currently, the cards feature 13 notable woman — one for each number. But in the future, the Wahls would like to create a deck with 52 different public figures.

The duo thought long and hard about which women to feature, settling on several well-known women like Beyonce, Ruth Bader Ginsberg, and (of course) Hillary Clinton, as well as a few lesser-known (though no less important) ones like Wilma Rudolph, an Olympic gold-medal-winning track star who grew up with polio, and Sylvia Rivera, a trans woman and LGBT activist involved in the Stonewall riots.

When people play with the cards, Zebby Wahls tells Bustle over the phone, "I hope that they take the time to think about these women and who they are and what they've accomplished."

"It's paying homage to this incredible group of women who have accomplished so much even when the deck was stacked against them — pun 100 percent intended —and also to create some incredible art," says Zach Wahls. "We have over 150 women who have been suggested to us by various people," he adds. "That's exactly the discussion we were looking for."

To continue this discussion, the team is soliciting suggestions on The Woman Cards' website for women to include in future editions. You can also order your own deck for $15 on Kickstarter if you'd like to teach your house party guests a lesson or two about women's history.

More like this
Amanda Gorman Shared A Powerful Message On Meghan Markle’s Penultimate Podcast
By Darshita Goyal
What Does “The Rizz” Mean On TikTok? The Viral Slang Term, Explained
By Alexis Morillo
The 10 Memes That Defined 2022
By Alexis Morillo
This AI Filter Shows How You’d Look In Different Time Periods
By Alexis Morillo
Get Even More From Bustle — Sign Up For The Newsletter