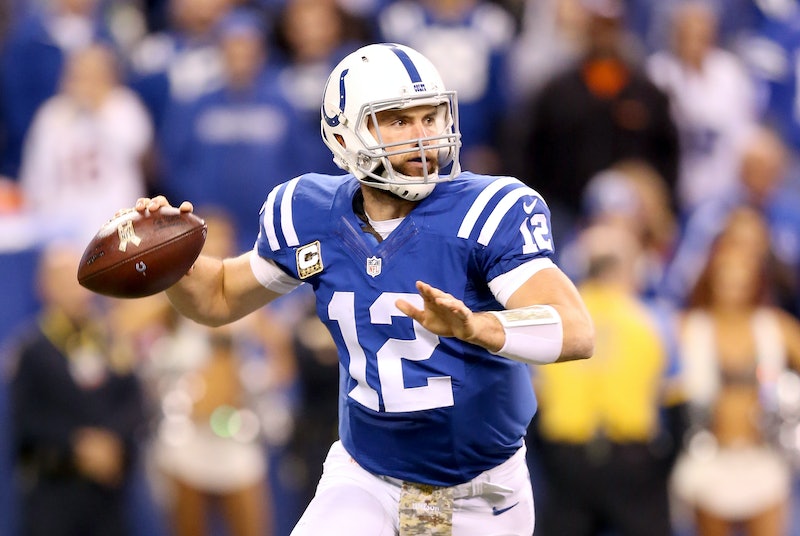 When you think of people with bookclubs, you tend to think of Oprah Winfrey or suburban soccer moms, but of course in reality, anyone can have a bookclub. In fact, even NFL quarterback Andrew Luck has a bookclub — and it looks pretty awesome. You should probably consider joining.

Andrew Luck, who was a number one draft pick in 2012 and currently plays for the Indianapolis Colts, has apparently loved books his whole life. His enthusiasm for reading and for sharing books has even earned him the title of "unofficial librarian" for the Colts. And now he's decided to cast his literary net even wider by starting a book club.

"I love to read both fiction and nonfiction and I feel strongly about the power of reading. So I thought, ‘Why not start a real book club?’" he explained to ESPN.

And so the Andrew Luck Bookclub was born.

Luck is not the only famous person to launch a bookclub, of course. Even apart from Oprah Winfrey, people ranging from Facebook founder Mark Zuckerberg to actress Emma Watson have launched bookclubs to share the books that matter to them. However, it's still pretty rare among professional athletes — though some athletes have made headlines for joining bookclubs in the past. And Luck's bookclub is particularly awesome since it focuses not just on adults, but also on young readers.

The bookclub periodically selects two books: one for "Veterans," aka adults, and one for "Rookies," aka kids. And the fact that a football star is reaching out to encourage young people to read is pretty awesome. After all, kids look up to athletes, and hearing how much a quarterback they admire loves to read might help encourage young readers to pick up books themselves.

There's no official word on how often the Andrew Luck Bookclub will update selections, though Luck will select all books chosen during the offseason, with "guest athletes" helping out during football season.

The first two books are The Boys in the Boat by Daniel James Brown for adults and Maniac Magee by Jerry Spinelli. There's no word whether all books will be sports-themed or whether Luck just wanted a sports connection for the opening titles.

Either way, the whole thing is pretty cool. Because as someone who is a fan of both, I can tell you that books and sports are not as separate as people like to pretend. Lots of readers play sports. Lots of athletes read books.

You can find out more about the Andrew Luck Bookclub at the website here or in the video below.