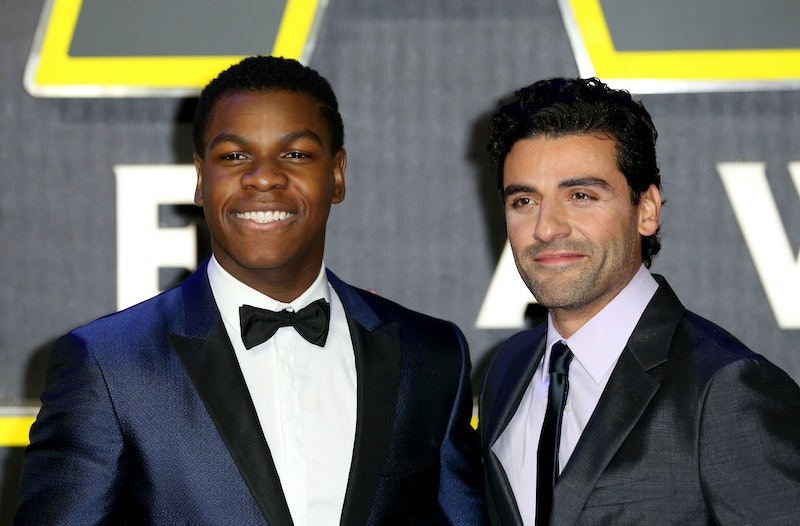 One of the most glorious things about the new Star Wars movies is that The Force Awakens created new characters to keep fans occupied for the next many years, from Rey, to Finn, to Poe, all of whom struck a chord with viewers. Yet soon, fans might get to see something even more exciting in the galaxy: the introduction of LGBT Star Wars characters. In GLAAD's 2016 Studio Responsibility Index Report, released in May, the organization urges Star Wars to introduce gay and lesbian characters into the franchise's next film, 2017's as-yet-untitled Star Wars: Episode VIII.

As audiences and critics fight for more representation in films, it'd make sense that the next Star Wars include LGBT characters. After The Force Awakens, the Star Wars fandom was quick to note the insta-bond between Finn and Poe; despite befriending each other for opportunistic reasons (Poe needed to escape, Finn needed a pilot), all the lingering hugs and jacket compliments shared by the duo led some viewers to think there might be something more between them. And while nothing has been confirmed, even the stars have spoken out on the mysteriousness of Finn and Poe's relationship, leading many to suspect that their friendship could develop into a real romance.

Whether or not it'll actually happen, though, is unknown. Finn seems to have low-key designs on Rey, although her affections towards him are a bit harder to read. Yet perhaps a love triangle might form, in which Finn has a crush on Rey, Poe likes Finn, and Finn grapples with his feelings about Poe. It sounds like the start of a juicy subplot, but it could be more meaningful; introducing an LGBT relationship into Star Wars, or even just LGBT characters, could mean huge things for Hollywood.

As the GLAAD report notes, in 2015, only 17.5% of the 126 major studio releases featured LGBT characters... which is no different than it was in 2014. So if an LGBT character or two — especially as protagonists — were to appear in a Star Wars movie, one of the world's most popular franchises, then it would be an enormous win for LGBT visibility. It would also show how much more diverse and inclusive the franchise has become since it began. You can bet that 40 years ago, it wouldn't even be a possibility to have LGBT main characters in a blockbuster film, let alone a (potential) love triangle between a gay Latino man, a bisexual black man, and a straight white woman (who's lauded for her bravery and independence).

It also might make for an interesting parallel, plot wise. The original Star Wars trilogy lightly touched upon a love triangle between Luke, Leia, and Han. Force Awakens felt like a fresh update of A New Hope in many ways, so it wouldn't be insane to have a new love triangle anchoring these next two films. And even if there's no love triangle, just a relationship between Finn and Poe, It would be a huge deal if that duo became the Han and Leia of the new Star Wars films. What if the new Star Wars focuses on the romance between two LGBT lead characters, while its straight female lead remains romantically unattached and focuses on becoming a Jedi? That would be the best, most delightfully progressive move the franchise could do.

But these are all possibilities that rely on a lot of "ifs," of course. Although both John Boyega and Oscar Isaac have teased a potential Finn-Poe romance, that's no guarantee the characters will end up identifying as LGBT. Still, there's reason to hope. Force Awakens filmmaker J.J. Abrams, who isn't directing the next flick but has stayed on as executive producer, spoke positivity about the potential for more gay and lesbian characters in the Star Wars universe in February, saying at the Oscar Wilde Awards,

"To me, the fun of Star Wars is the glory of possibility, so it seems insanely narrow-minded and counterintuitive to say that there wouldn’t be a homosexual character in that world...when I talk about inclusivity it’s not excluding gay characters. It’s about inclusivity. So, of course."

I guess time will only tell if this will ever become canon. We still have another two-ish years until Episode VII comes out, but with comments like that, there's definitely a lot of new hope on the horizon.