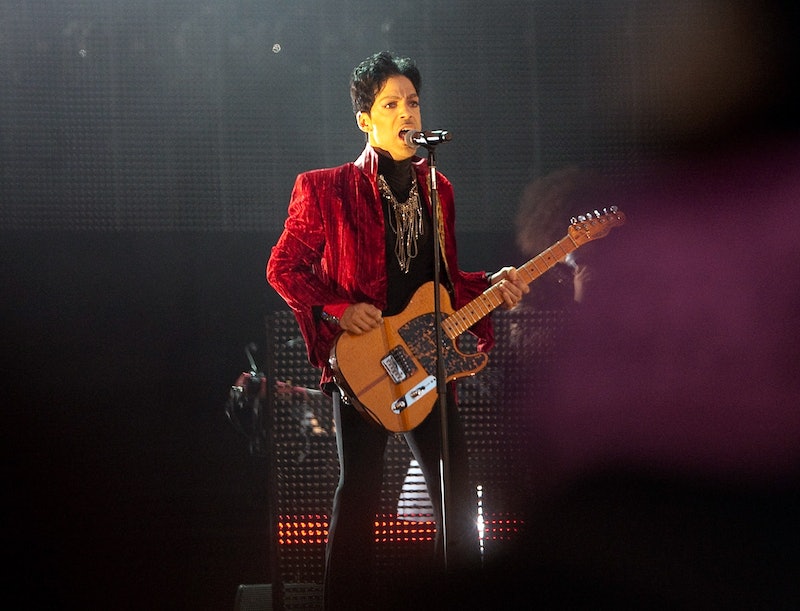 STR/AFP/Getty Images
By Alexis Rhiannon
May 2, 2016

This is a tough thing for me to write, and I don't even really know where to start, but I just found out that before he died, Prince said he forgave Chris Brown for what he did to Rihanna. Oof. In a previously-unpublished interview with Rolling Stone in January 2014, Prince not only refused to judge Brown for his 2009 alleged assault on then-girlfriend Rihanna, but went so far as to express a wish to mentor the young singer. This is where I need to stop and take a deep breath, because there's a big part of me that becomes disgusted anytime someone tries to excuse Brown's alleged domestic violence against Rihanna.

But maybe I should take a step back and listen to what Prince has to say. In the conversation, when Prince mentioned his desire to mentor Brown, the interviewer is surprised, and wonders if Prince doesn't find Brown's actions unforgivable. Prince says:

Unforgivable? Goodness. That's when we go check the master, Christ. ... Have you ever instantly forgiven somebody? It's the best feeling in the world, and it totally dismantles that person's whole stance.

As difficult it is for me to swallow what Prince is saying, there are some important points in this quote that help me understand where he's coming from. First of all, it seems like he isn't excusing Brown's behavior, nor is he minimizing it. He never denies that Brown was wrong; that doesn't seem to have anything to do with his own capacity for forgiveness. It's the part I'm impressed by. His willingness to set his own ego and judgement aside and really try to help someone, regardless of what they've done, is wildly impressive. It's what made Prince the wonderful, compassionate, generous person that he was, in my opinion.

In my estimation, there are plenty of people in the world who will never forgive Chris Brown for what he did to Rihanna, and while I'm firmly rooted in that camp myself, I can also see the ways in which holding onto this hate has failed me.

Chris Brown had to face a huge amount of judgement and condemnation in the wake of his actions. He was under a spotlight of public judgement. But to me, all the hate mail in the world wasn't satisfying enough. But is that really a healthy way to deal with what happened? Maybe Prince's route of forgiveness was the better one, after all.

Prince's willingness to forgive Brown is what made him so special. He was never lacking in compassion, and his ability to attempt to reach out a helping hand is, in my opinion, extremely impressive.

More like this
Rihanna Is A Mom Now After Giving Birth To Her First Baby With A$AP Rocky
By Ananya Panchal and Jake Viswanath
Spice Girls’ Net Worth: The Richest Member Is Wealthier Than The Rest Combined
By Hugh McIntyre
Rihanna Wore A Sparkling Lingerie Look For Date Night With A$AP Rocky
By Allie Fasanella
Doja Cat Needed Tonsil Surgery & Now She Can't Eat Taco Bell's Mexican Pizza
By Jake Viswanath
Get Even More From Bustle — Sign Up For The Newsletter