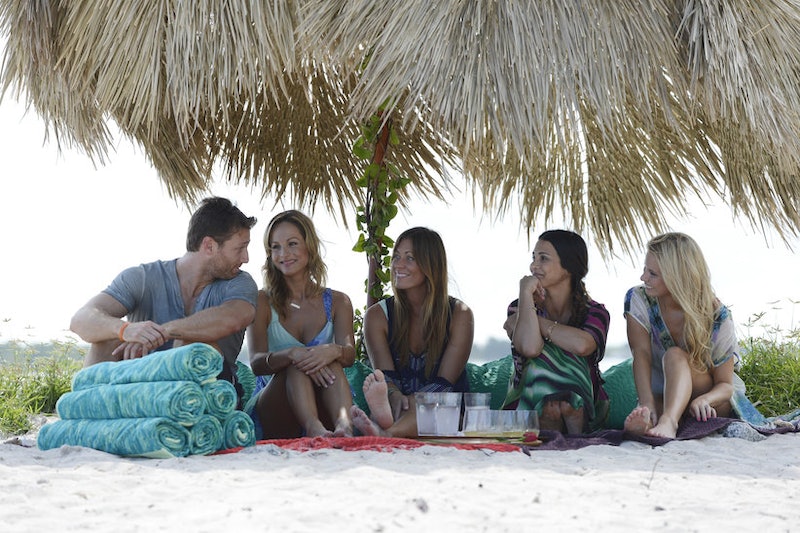 So long, gorgeous New Zealand! Hello, gorgeous Miami! Monday night, Juan Pablo Galavis took The Bachelor ladies to his city. Six contestants entered the ring, and only four continued on to the hometown visits. A lot happened. Let's get to it.

Juan Pablo dropped by the girls’ hotel room and handed Sharleen the one-on-one date card: “Come SEA my city.” He told her to get ready, lickity-split. Sharleen was thrown off. The other ladies picked up on how thrown off she was.

In a confessional, Sharleen said she and Juan Pablo don’t have “that cerebral connection that [she] need[s].” She also said that that day she'd decide whether or not she thinks Juan Pablo meeting her family would be a good idea/if she could actually stand being in a relationship with him.

Their date involved hanging out on a yacht. And by “hanging out” I mean “MAKING OUT HARD.” They made out hard for 99 percent of the date.

When they took a break from making out hard, they discussed how big a commitment her job is. She said she’d been thinking about it a lot, and that her priorities have shifted since she’d been on The Bachelor. (She used to be job first, everything else second. Leave it to The Bachelor to shake your life goals up.) Juan Pablo responded, “Oo, I like that.” I'm sure you do, Juan Pabs.

They went back to making out hard again. Sharleen asked, “Why can’t I stop kissing you?” In a confessional, she said not being able to stop herself with JP “disturbs” her.

After her date, she told Renee she wasn’t sure she was feeling it and that she might leave. Renee tried to talk her down from the Juan Pab-ledge.

Juan Pablo and Nikki went to Camila’s dance recital. Nikki met Juan Pablo's family and Carla (Juan Pablo's ex). Everyone was nice. The dance recital was very cute. The kids sang and danced AND CAMILA HAD A SOLO. SHE SANG HER LITTLE HEART OUT. CAMILA WAS SO GOOD.

After the recital, they went to Juan Pablo's office: Marlins Park! Cool office, bro. They drove into the empty stadium and walked out on the field. They played catch, kissed, picnic'd, and talked about family stuff. Nikki told him that "family is number one in [her] book," and he ate it UP.

Later on, Sharleen told the other girls that she was done and that she’d be leaving that night. She hugged the other women goodbye. The other women were like, “He’s going to be in shock,” but they were probably thinking, “THANK GOODNESS. ONE LESS FRONTRUNNER TO BUG OUT ABOUT!”

Sharleen went to Juan Pablo’s room and got honest with him. She was very emotional. “I just feel like, I just don’t know if I can get to the place I’m supposed to be at in three weeks’ time,” she whispered. “And, like, the idea of a proposal, it doesn’t seem like something that is possible for me.” She's too real for this show. TOO REAL.

She told him she didn’t want to take someone's spot (because she was so uncertain about all of it), but that what she feels for him is not something she feels every day. She cried a lot. He held her and stroked her hair and face. “I don’t want you to say ‘I’m sorry,’ because you can’t be sorry for something that you feel," Juan Pablo said.

In a confessional, Juan Pablo cried over her. I understood his tears. Sharleen ruled. Sharleen said that though she enjoyed the making out hard, she knew he didn't have what she was looking for.

Juan Pablo and the four ladies took a puddle jumper to a private island. Whoever got the Group Date rose was guaranteed a hometown visit AND a one-on-one second part of the date. You bet the four women were out for blood.

There was a lot of hanging out and wooing on the beach. Everyone wanted to win over Juan Pablo SO. BADLY. They pulled out all of the stops. Personal stories were shared. Tears were shed. Letters from family members were read. At one point, Juan Pablo threw his head back and laughed at something someone said. Like a goddamned cartoon.

Andi won the rose. Andi would get a hometown visit AND a one-on-one date. The other three took the puddle jumper back to the hotel. Clare was NOT happy about it: “Let’s fucking wrap this shit up and go home."

Andi and Juan Pablo went to a dance club and danced. Romeo Santos performed. She held the rose against the back of Juan Pablo's neck the entire time. It made me nervous because I worried a thorn might stick him.

The rose is probably de-thorned, though, right? I worry too much, right?

The non-Andi ladies went back to the hotel and hung out with Nikki. Nikki thought it was funny that three of them were dismissed from the date. Lots of uncomfortable silence. Nikki called out Clare for being visibly upset about not getting the rose. Clare said maybe Andi needed the rose because she needed the reassurance, and that remark pissed off Nikki. She went to her room.

Clare followed her and asked why she stormed off. Nikki said she was mad that Clare seemed like she might start talking shit about Andi. Clare told her she wasn’t going to talk shit, but that she was annoyed that Nikki laughed at them for being cut from the Group Date. There was a lot of interrupting and cutting one another off. I went cross-eyed and stopped listening. I checked back in when Nikki asked Clare to leave her room. Clare said she didn’t have to leave because it’s everyone’s suite.“This is not your room," Clare said. "Did you pay for it?” Clare then asked Nikki if she paid for the room 17 more times. They argued for another 45 minutes. It finally ended when Clare said something snarky and left the room.

Chelsie was sent home. Juan Pablo cried and exhaled a lot. He held her hand and escorted her to the limo. She said, “It’s nice to date a good guy for once, you know?” AUGHHHH. She also said something about if there’s a better match out there for him, that’s what she wanted for him. AUGHHHHH. And then she cried in the limo.