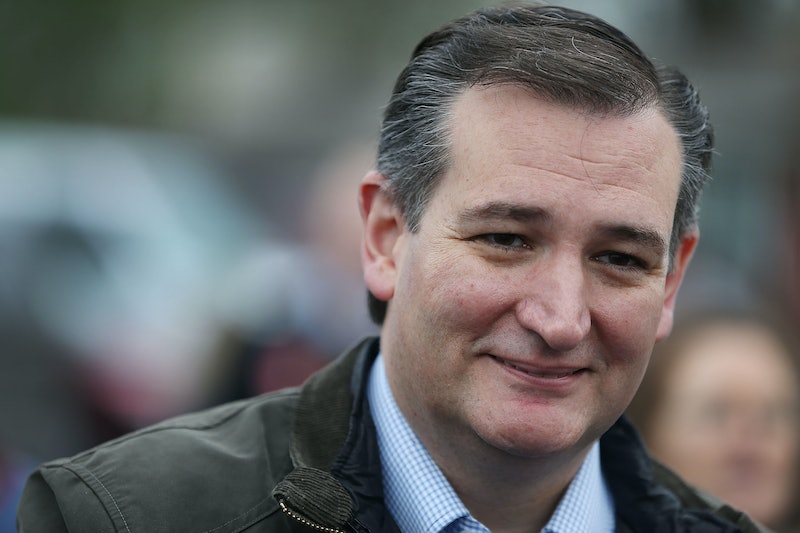 In the days leading up to the Hoosier State's Republican primary, Ted Cruz is making some last-minute moves in an attempt to grapple the affections of Indiana voters from the hands of Donald Trump. At this point in the game, it's in Cruz's best interest to boost his chances in Indiana, as Trump is evidently running amok with votes and determined to barrel his way into the Republican nomination. Since Cruz's poor showing during the Acela Primary, Indiana has taken the foreground in Cruz's mind — and with good reason. Trump fever has overtaken much of the U.S., and even the Republican Party isn't quite sure how to handle it.

Cruz has employed every trick in the book at this point, including signing Carly Fiorina on as his preemptive vice presidential nominee — a move many have called a "PR stunt" — in fear that Trump might actually become the Republican nominee. He has boasted Indiana as his chance to show Trump the proverbial stuff of which he is made, and now he's throwing some shade at Trump in a last-ditch effort to reveal his lack of humanity and conservative values. Cruz made a point to knock the hateful attitudes Trump is breeding.

While in Osceola, Indiana, Cruz stated, "I trust the people of Indiana to differentiate ... We are not a bitter, angry, petty, bigoted people. That is not America. I reject that vision of America." It's obvious that he is trying to appeal to the collective intelligence of Americans. He doesn't want America to fall into thoughtless rhetoric, which frankly sounds almost like either of the Democratic presidential candidates could have said it.

Cruz has had a bumpy relationship with Trump since the earliest debates of this election cycle, but as the field has narrowed, the emotional value placed on this contest has increased on Cruz's side. He even went so far as to engage Trump supporters in a confrontational exchange during a campaign trail stop in Indiana. The overwhelming support for Trump is more obviously concerning to him than ever before.

A win for Cruz in Indiana is almost an absolute necessity for the endgame trajectory he'd need to carry him through into a contested convention. There are still 571 delegates up for grabs, and unless Cruz can keep Trump from many of them in the upcoming races in Indiana, Nebraska, West Virginia, Oregon, Washington, and the June 7 major voting day, his shot at the nomination may never actualize.