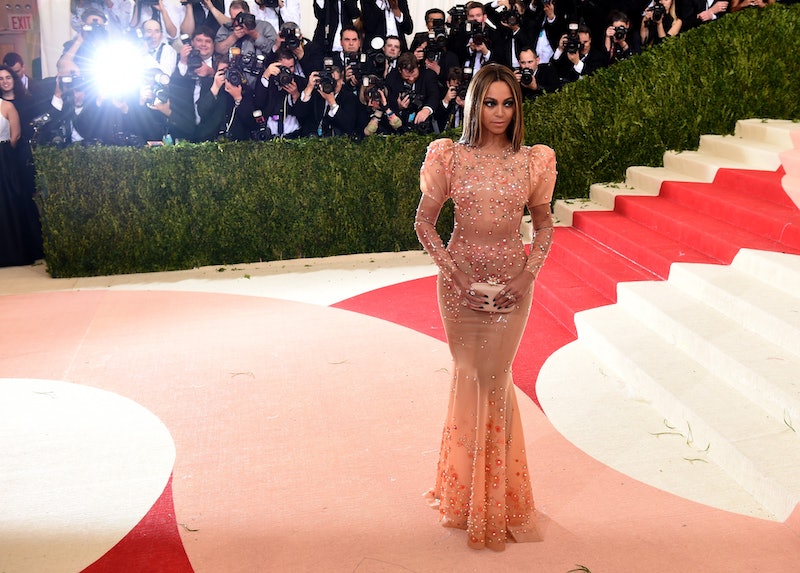 TIMOTHY A. CLARY/AFP/Getty Images
By Caitlin Flynn
May 3, 2016

Unless you've been living under a rock for the past week, you've surely heard the rumors of potential trouble in paradise for Beyoncé and Jay Z. On May 2, Beyoncé arrived at the Met Gala without Jay Z and everyone wants to know why. Of course, both members of this power couple have insanely busy schedules and ordinarily it wouldn't be a major deal for one of them to attend an event solo — but after Lemonade renewed rumors of Jay Z's alleged infidelity, the spotlight is on the pair even more than usual and pretty much everyone on social media is speculating about whether or not his absence is related to "Becky with the good hair."

According to The New York Daily News, Solange accompanied her sister to the Met Gala in a yellow ensemble, which the outlet suggests could be an attempt to throw some "possible 'Lemonade' shade" at her brother-in-law. In fact, it was after this very same event two years ago where she famously attacked Jay Z in an elevator, leading to rumors that she was furious with him for cheating on her sister.

Although Jay Z's absence from the Met Gala certainly isn't helping quell the non-stop rumor mill, People reported that Beyoncé and Jay Z enjoyed a romantic dinner in Miami on Sunday night and on Friday, April 29 he and Blue Ivy were seen adorably dancing backstage at Beyoncé's Formation Tour show in Tampa. Beyoncé attending the Met Gala solo could be purely coincidental, but that's not going to stop everyone from wondering what this could mean about the couple's status. Based on their appearances together over the past week, it seems that a scheduling conflict is the most likely reason for Jay Z's absence.

With or without Jay Z, I'm sure one thing we can all agree on is that Beyoncé looks stunning this evening.