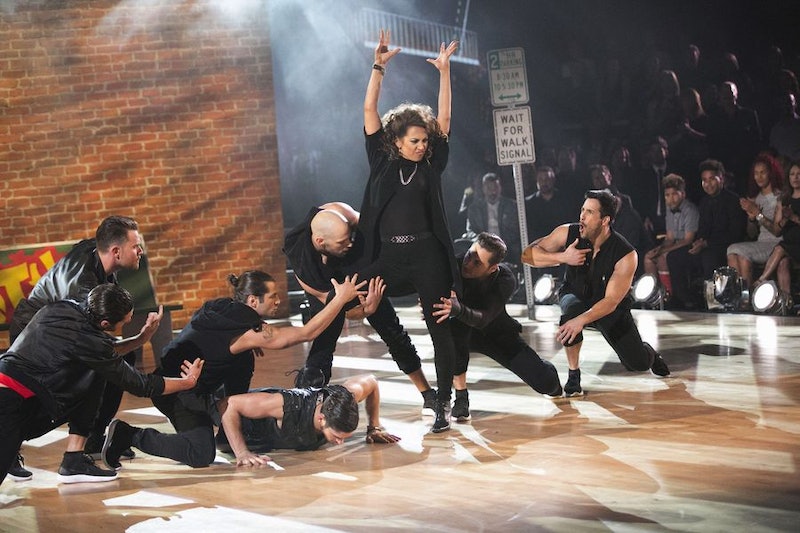 Ginger Zee has really been juggling some responsibilities since she’s been on Dancing With The Stars. Besides dancing with Val Chmerkovskiy, she’s the chief meteorologist on Good Morning America and she had a baby boy four months ago. Going back and forth hasn’t been easy, and Ginger has made it look easy — until last week, that is. Ginger and Val danced to “Nasty” by Janet Jackson, and the judges weren’t too keen on the performance. They basically said she half-assed it, and that was tough for Ginger. Fortunately, she channeled all of that energy from last week and Ginger and Val got the first perfect score of the season on Dancing With The Stars .

Ginger was pretty crushed when she found herself at the bottom of the leaderboard last week — she was seriously tied for dead last. This week for Icons Week, Val really, really pushed Ginger. He was really particular and demanding, and in the pre-dance interview, she said as much. Val was really driving her to do better, be better, focus better, and just as Ginger was on the verge of tears, Val snapped out of his teacher mode to give Ginger the perfect pep talk. He said that he was just driving her to do better because he wants her to win, and she’s “one of the best experiences he’s ever had on the show.” Nice, right?

Whatever he said worked, because Ginger and Val looked like they were having an amazing time on the floor. It was infectious, so much so that the judges gave them straight tens — it was definitely the pick-me-up that Ginger needed from last week, and it’s sure to push her even harder in her quest for that Mirrorball Trophy. Tough as he may be, Val is one hell of a dance instructor and, best yet, a friend.