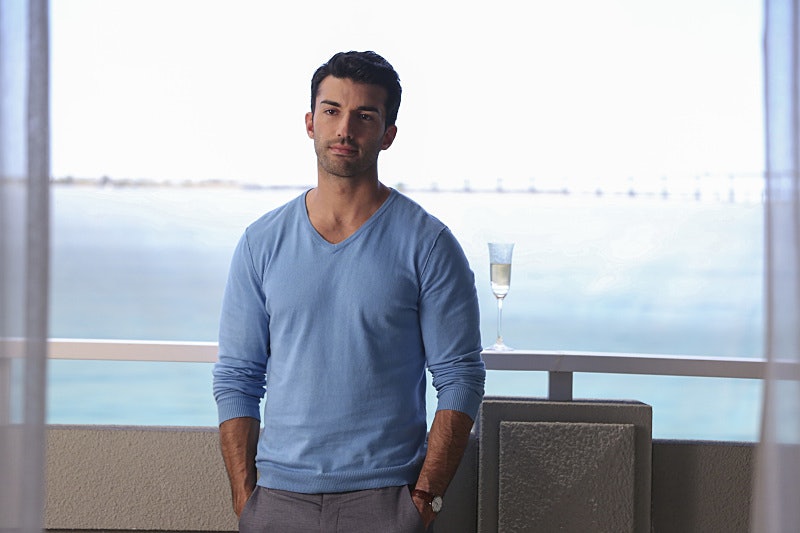 For quite some time now, viewers have suspected that Derek is planning something on Jane the Virgin and now thanks to Monday night's episode, we have a better idea of exactly what that plan is. Derek is blackmailing Rafael, threatening to turn him into the police for insider trading if he doesn't hand over the Fairwick Hotel to him for the insanely cheap price of one dollar. Now, for those of you who need a little refresher course on this particular storyline: Derek tricked Rafael into participating in an insider trading scandal during a drunk night out. To make matters worse, Rafael then proceeded to use that money in order to buy the Fairwick, therein making him a knowing participant in the crime and giving Derek the leverage he needed.

Obviously, Rafael had no choice but to agree to Derek's terms, which is sure to be a terrible hit for him on the business front. But I highly doubt Derek's plans end there. By the end of the episode we saw him celebrating the victory with his mother Elena (aka crime lord master Mutter) on a pretty sweet looking boat. (Not that's a Mother's Day present, folks!) So whatever is going on here, Mutter is definitely in the thick it. So the question is, what do they plan to do with the Fairwick now that they have it?

One theory could be that this is all a plan to get back at Rafael for working with the police and trying to put Mutter away. (Something tells me Elena and Derek know how to hold a grudge.) Or there's something bigger going on here than meets the eye. Perhaps this is going to be the new home base for Mutter's crime operation. Either way, things are not looking too great for Rafael right now. And considering that Michael is now also convinced that Derek's been lying this whole time, his safety is getting less and less certain as well. I think it's time to start panicking, you guys.

More like this
'Virgin River' Season 4 Finally Has A Release Date
By Bustle Editors
What’s New On Netflix: 'Stranger Things' & 'Somebody Feed Phil' Return
By Arya Roshanian
'Ghost In The Shell: SAC_2045' Was Only Supposed To Last Two Seasons
By Kadin Burnett
Michael Peterson & Sophie Brunet’s Relationship Timeline
By Morgan Leigh Davies
Get Even More From Bustle — Sign Up For The Newsletter