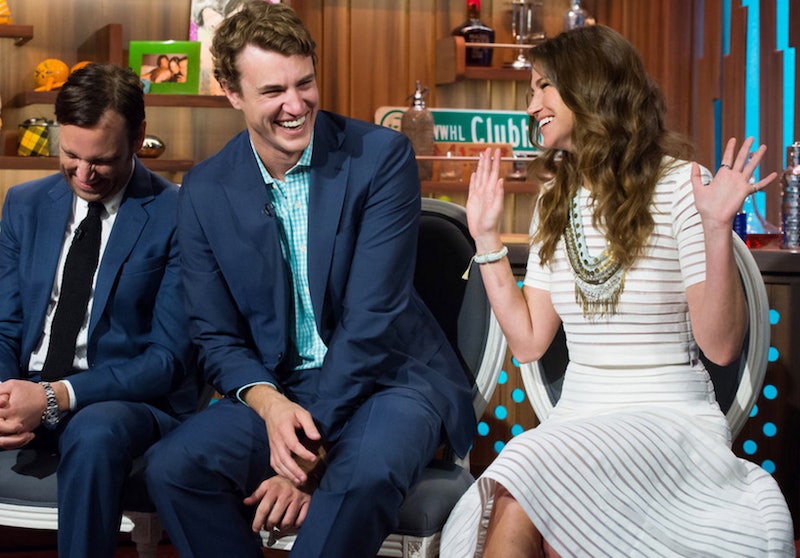 Another episode of Southern Charm, another party Kathryn wasn’t invited to. On Monday’s installment of the Bravo reality series, a majority of the Charmers celebrated Shep’s birthday at a roller rink. However, one person in particular didn’t show up. And it wasn't because she didn’t want to go or because she got a flat tire on the way to the get-together or something, but because she wasn't invited in the first place. Yes, once again, Kathryn was excluded from a Charmer event. So, why wasn’t Kathryn invited to Shep’s birthday soiree? Rhymes with “Flandon fland Flitney.”

To thank sweet Shepard for helping her settle back into Charleston life, Landon organized a shindig for her longtime pal: The invitees would don their finest ‘70s roller disco garb, get picked up by a party bus, and head to a booze-free roller rink. In a talking head, Shep said he didn’t know how to skate and added that he wasn’t thrilled at the lack of alcohol, but he wasn’t about to raise a stink. Hey, as long as his friends were there — and yes, that friend list included Kathryn — he would be happy.

When discussing the invitee list, Landon and Whitney were none too pleased that Shep wanted Kathryn at his birthday. They think she’s a downer, they don’t like her, etcetera. So, Landon made an executive decision: She did not invite Kathryn at all. And that was that.

The day of the skate soirée, the revelers convened at a bar where they would be picked up by the party bus. When it was time to launch, Shep noticed that Kathryn had not yet arrived, so he suggested they sit tight until his buddy showed up. Landon shrugged and said they couldn’t wait for her. And with that, they drove to the skate rink.

After a few loops around the rink, Craig decided to give Kathryn a call to find out why she blew the evening off, because much like Shep, Craig was under the impression that Landon actually invited Kathryn. Kathryn did not answer his call, so he left her a voicemail. Landon continued to assure the group that she certainly invited Kathryn. I watched the remainder of the episode through my fingers.

Next, it was Shep’s turn to figure out what was up with K. Dennis. After a few rings, Kathryn answered. She quickly told Shep she didn’t know about the party until she got Craig’s voicemail, and this reveal stunned Shep. He told Kathryn that Landon planned the whole thing and there weren’t actual invites, so he didn't know what happened.

“Oh, really?” Kathryn replied. “I just talked to Thomas, and he got the email that y’all are on.”

Aaaaaaand with that, Landon's story balloon was popped.

After the phone call, a visibly frustrated Shep confronted Landon about non-viting Kathryn. Landon denied this altogether and insisted Kathryn lied to him. There’s some talk about no invites whatsoever, but when Shep asked how she actually contacted people, Landon said she sent a text out to everyone. When Danni questioned this, Landon asked, “If she doesn’t show up, who cares?”

Before the argument could escalate, Landon and her glittery jumpsuit skated away. Shep, disappointed in how the evening unfolded, just wanted everyone to “take the high road.” And with that, the episode was over.