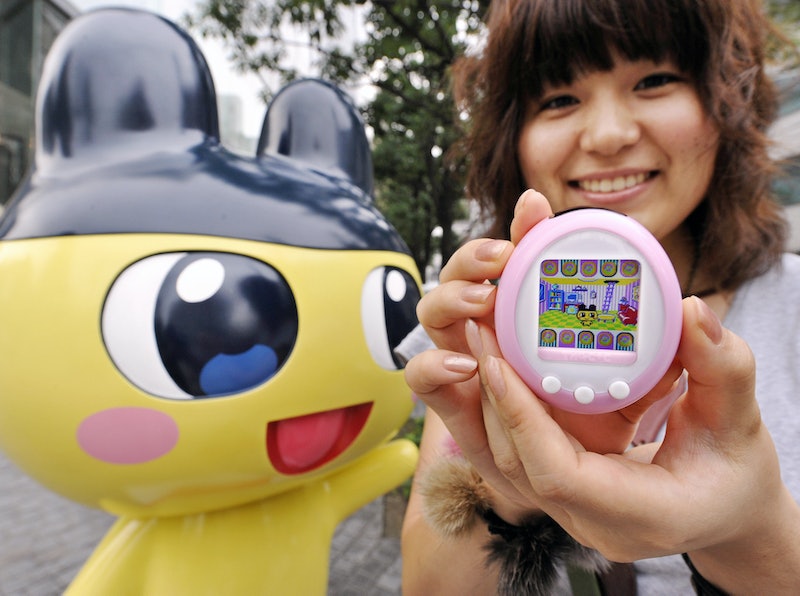 We always talk about our favorite things from the '90s with a great sense of nostalgia. The now irrelevant tchotchkes that define us as a generation sometimes appear to exist in a vacuum. That is to say, they came to us as if materialised through thin air, we hyped them, used them, loved them, then discarded them — because, well, cooler stuff started happening. Can you imagine having a Tamagotchi today when all the kids are Instagramming and Snapchatting on their smart phones? Didn't think so. Despite your relative indifference to the appearance of some of your favorite things in the '90s, some of them have some pretty interesting origins stories. Future Marvel-style franchises, take note.

These relics of the '90s that we so revere now didn't just come about through wishes and dreams. People invented them. And some of them have some pretty awesome stories. The invention of the '90s, yes, sometimes happened by accident, but even accidents can be deeply fortuitous. From slap bands to Doc Martens, some of the most iconic symbols of the '90s have interesting beginnings that might surprise you. In celebration of the best things from the '90s, here's how some of your most favorite '90s things we actually invented. Be prepared to be impressed.

Slap Bands were invented in 1983, even though we mostly associate them with our fond '90s memories. Also known as Slap Bracelets and originally marketed as the "Slap Wrap," Slap Bands (or whichever name you prefer) came into being when Wisconsin shop teacher Stuart Anders was messing around with steel ribbons. Slapping one around his wrist like a bracelet, he found the greatest gimmick of many a childhood.

It makes perfect sense that grunge and Hypercolor t-shirts we born in the same place. Released in four color-changing ways in 1991, the. Hypercolor t-shirt was the brainchild of Generra Sportswear Company of Seattle. If you had a Hypercolor t-shirt, you'll remember the thermo-reaction that happened when you applied heat to it, and hastily attempted to draw swear words on it before the temperature reset. The breathtaking effect was caused by a thermochromic pigment created by Matsui Shikiso Chemical of Japan, which basically revolutionized our sartorial game in the '90s.

Tamagotchis, every '90s child's favorite pixellated pet, were first sold in Japan in 1996. In an eggshell, the "game" was invented by Aki Maita, who loved pets, had a small apartment in Tokyo, and was also busy with work and didn't have enough time to devote to a living, breathing creature. And so the Tamagotchi was born. Maita might not have anticipated the actual horror experienced by many who accidentally let their Tamagotchis die of neglect. In the hearts of many, Tamagotchis were real pets.

I had purple Doc Martens boots in the '90s. They were the shoe du jour, and they've fantastically stood the test of time to remain popular today. The iconic Doc Martens boot was invented by Klaus Martens way back in 1945, when the avid skier was looking for a low impact shoe to help him recover from a broken foot from a skiing accident. But it wasn't until grunge and Britpop embraced the boot in the '90s that it became synonymous with a generation.

Polly Pocket, the itty bitty pocket doll, has a pretty cute invention story. She first came to life in 1983 when father Chris Wiggs wanted to make a portable doll world for his daughter to be able to carry around and play with. He made the first ever Polly Pocket inside an old makeup compact. Now that's some next level fathering! Polly Pocket was bought by Bluebird Toys at hit the British market in 1989, before being taken over by Mattel in the early '90s and becoming a staple of every little girl's doll desire.

6. Hampton Hamster and The Hamster Dance

You might know "The Hamster Dance" best as that annoying techno song, or you might be a true child of the '90s are remember the original Hampton Hamster. Hampton Hamster was originally a Geocities site, one created by Canadian art student Deidre LaCarte in 1998. She made the site as part of a competition with her best friend and sister to see who could make a site that got the most traffic. The site is still online, thankfully.

The PalmPilot came into our lives in 1992, and for those of you not old enough to remember, it was pretty much the most exciting touch screen before smart phones came along (and the reason why touch screen personal computing progressed as quickly as it did). Although you did use a stylus on the screen, which in retrospect, is kind of embarrassing. The first prototype for the Palm Pilot was made by inventor Jeff Hawkins, who created a mock one by cutting out a block of wood for the body of the Pilot and using a chopstick in lieu of the stylus. He then walked around pretending to use it. And that was the first ever Palm Pilot.