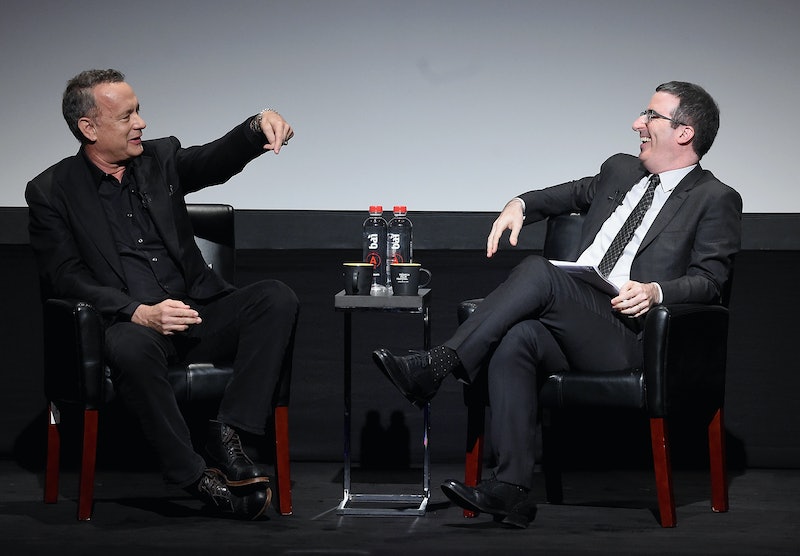 Since Last Week Tonight premiered on HBO in April 2014, John Oliver has gained an impressive following among famous people and everyday citizens alike. Though his famed Donald Drumpf stint definitely sparked conversation, the comedian has been a significant player in the political satire world for quite some time. And he's made it very clear that no one's exempt from his politically-charged, snarky remarks that most commonly revel in some fact his audience may not have otherwise known. In June 2014, one unnamed TV executive described Oliver's difficult-to-pinpoint allure in a conversation with The Guardian.

He's got a traditional Englishman's gift for telling Americans what to do and he's very good at it. He's lovable with a wonkish quality that let's him get away with some strident talk.

Yes, he's a funny man, but there's more to it. His borderline activism has actually inspired people to take action. Perhaps unintentionally, Oliver is proving that like digital journalism, satirical media, in some ways, is an entirely new frontier that has yet to be surrounded by boundaries. TIME magazine dubbed this phenomena the "John Oliver Effect."

One memorable rant, for example, inspired so many Americans to visit the United States Federal Communications Commission's website,that it literally crashed. Politicians aren't even guaranteed that amount of influence over the public's actions. In an episode that aired in June 2014, Oliver criticized the FCC's new Internet proposal that would have allegedly unleveled the Internet access playing field and undermined the principles of net neutrality. The government's official webpage explaining the policy was viewed almost 800,000 times by the following Tuesday, The Guardian's Amanda Holpuch reported. And it doesn't end there.

Less than two years later, Oliver created a "Make Donald Drumpf Again" hat whose sales surpassed those of Donald Trump's "Make America Great Again" campaign hats. On top of that, he's generated his own website called DefinitelyRealQuotes.com, and as you may have guessed, the quotes are definitely not real. When it comes down to it, Oliver's wildly popular for some legitimate reasons. And based on the attention from his famous colleagues in the entertainment world, his work isn't going unnoticed. However, Oliver never really asked to fit into the celeb world. In fact, shortly after premiering his show, he told NPR that he thought it would compromise candid nature.

His refusal to mingle at parties hasn't stopped well-known people from praising his talents. And in case you were wondering, these quotes can be factually attributed to each of these individuals.

John Oliver has guest starred on The Tonight Show with Jimmy Fallon a couple of times. As it turns out, the late night hosts are friendly and supportive of each other. According to Fallon, people in his camp are big fans of the British comedian.

"Obviously, we're fans of yours from The Daily Show."

John Oliver accompanied Jon Stewart as a correspondent on The Daily Show for over seven years. Stewart, who was his boss at the time, arranged a special goodbye segment when Oliver left. He avoided too much sentimentality, but the feels were definitely there.

We've all known this — you're a tremendously talented individual ... You know we know ...

The ESPN host voiced that she's a fan of John Oliver during an unexpected Twitter rant concerning the WWE.

I am a fan. A fan of sports. A fan of television, good and bad. A fan of ‘80s music. Of the Spurs. Of cheesy movies. Of John Oliver.

As part of the Tribeca Film Festival in April, Oliver interviewed Hanks in what proved to be an intriguing conversation. Hanks is clearly a fan.

[Oliver is] the only voice left in the public forum [telling us] what we need to know, what we should know. Our lives would be void of outrage, John. And for those people who don’t get HBO, they are void of outrage because they don’t get to see you.

The former Daily Show correspondent and colleague of Oliver praised the Last Week Tonight host for putting his own unique spin on political satire.

Everyone was so concerned that this would just be a knockoff, but he proved that there is more to current events satire than ‘The Daily Show.’ I mean, we all live on this planet together.

The British comedian who used to work with Oliver on the satirical podcast "The Bugle," described how their relationship began years ago in Great Britain in an interview with The Daily Dot.

We spent a lot of time together sitting on trains and in low-budget bed and breakfasts around the glamor spots of Britain. We started doing this thing together where John would slick his hair back and pretend to be an American stand-up named Johnny Dynamite, who basically had about three jokes and the catchphrase 'I’m dynamite!' And then he’d mime setting off dynamite and on the off-stage mic I’d make an exploding noise. So that’s maybe the origin story of our chemistry.

More like this
Yes, Billboard Queen Angelyne Really Ran For Governor Of California
By Brad Witter
Watch Benedict Cumberbatch Lead An ‘SNL’ Medieval History Lesson On Roe v. Wade
By Grace Wehniainen
10 Times Diana & Meghan Spoke Similarly On The Royal Family
By Sophie McEvoy
20 Photos From The 'Stranger Things' Season 4 Premiere To Make You Feel Old
By Alyssa Lapid
Get Even More From Bustle — Sign Up For The Newsletter