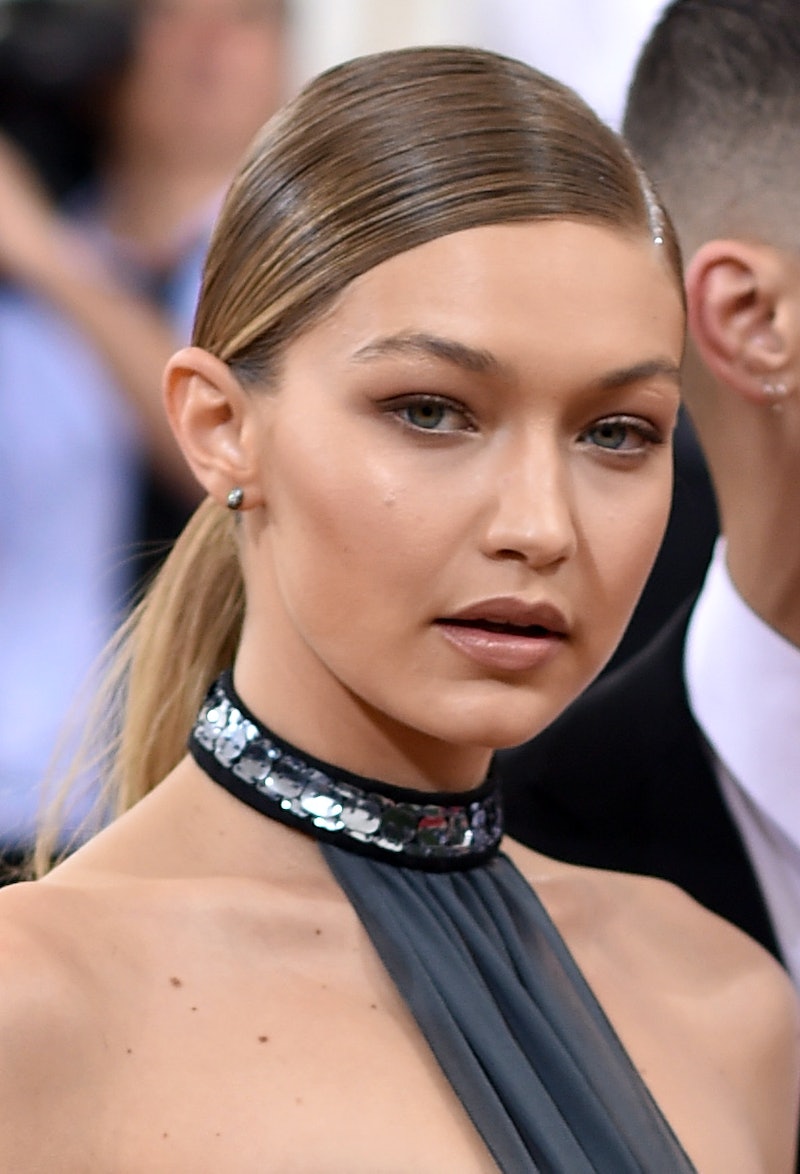 The Met Gala was filled with tons of wild and crazy fashions, but it was the details that put some outfits over-the-top. While you were staring at Zayne Malik's bionic arm for the entire red carpet, his date was the one who had the most stunning accessory. Gigi Hadid's Met Gala manicure, which is reportedly worth $2,000 according to Refinery29, was her key accessory of the night, and there's more to it that meets the eye. The event is the perfect time to go over-the-top with fashion and really hone in on the details, which is exactly what this model did.

There was no doubt in my mind that Hadid would show up to the Met Gala looking flawless, but I had no idea that her look would be so on-theme. Hadid rocked a tech-y looking grey gown that looked modern with a touch of the futuristic. Not to mention she had her knight in shining armor — literally — on her arm the entire time. But past all the dress embellishments and sparkly jewelry was a manicure so fabulous that you won't believe it until you see it.

At first glance it looking like your average metallic polish. It was until she flaunted the underside of her nail that you saw why the manicure was so special. According to Refinery 29, Hadid had "a cluster of crystals on the underside of each nail," just waiting to be shown off. It was a subtle touch that you have to see to truly understand.

How gorgeous are those? The design was created by Nails by Mary Soul using Kiss Products, according to Instagram, and I have to say that the manicurist did one heck of a job. Although it was hard to see from the red carpet, the manicure is clearly one of the best parts of Hadid's look.

Her nails did look just as fabulous from the front as well. The metallic polish went perfectly with the technology meets fashion theme and pulled in all the shine from the rest of her outfit as well. Let's just hopes she keeps these expensive nails for more than just one night!

There was a whole lot going on at the Met Gala, so there's no way that you could've seen every single detail. From pretty polish to beauty trends that are on the rise, there are some looks that deserve a closer look. Here are some of the things you might have missed.

While she actually looked pretty normal from the front, it was Madonna's backside that had everyone talking. If you look past her sheer skirt, you'll find some pretty fabulous braids that you might've missed the first time around.

Vikander was one of the first at the Met Gala, but it would take you all night to see every single detail of her look. She was one of the celebs that refused to play it safe, and her shoes were one of the best parts.

It's like the updated version of a '90s style.

Macklowe's look was a bit destracting, but if you look closely you'll see a pretty awesome clutch. The hand strap almost completely blends into the rest of the metallic outfit.

The singer carried her sunglasses along with her clutch. This was one of the more unconventional accessories of the night.

It wasn't until later in the night that it became clear why she brought the sunnies with her.

To protect her from the flashing lights, of course.

While her hubby's piercing blue eye color got most of the attention, the reality star's single ear cuff was just as fabulous.

Byrne's look wasn't the most exciting, but her choker is a detail that deserves to be spotlighted.

This look was one of my favorites of the night, but it wasn't until she turned around that you saw how stunning headpiece was all on its own.

How gorgeous is that hair?!

Look closely at the little white dot on Perry's outfit, because it's what makes her look fit the tech-y theme.

That's right, '90s kids. Perry brought a Tamagotchi with her to the Met Gala.

This was the first red carpet where Upton sported her engagement ring, so of course she had to make it a focal point. No other jewelry needed for this look.

I'm going to be completely honest and say that I have no idea what this even is, but it sure does make a statement.

Two of these earrings would be a little much, but one is just enough.

Instead of bleaching her brows like Katy Perry and Kim Kardashian did, she decided to change the color to something a bit more sparkly.

The Lemonade singer doesn't normally sport a smokey eye, so this was worth the second glance.

You could spend all day looking at the Met Gala details and still not take in every single one.

More like this
15 Elevated Fall Outfit Ideas That'll Make You So Thirsty For Cold Weather
By Allie Fasanella
Most Comfortable Underwear For Big Butts
By Audrey Williams
42 Black Owned Fashion & Beauty Brands To Support Today & Always
By Mekita Rivas, Shea Simmons, Kui Mwai and Dominique Norman
Aura Nails Are The Coolest Mani Trend RN
By Jordan Murray
Get Even More From Bustle — Sign Up For The Newsletter